The Waffen-SS is the military component of the SS of Germany. it is a multi-ethnic European force of 23 divisions and is held as an example of European cooperation. Although not a part of the official military, it is the de facto fourth service of the Wehrmacht and Germany's second land force.

Waffen-SS are used either as conventional combat units, or as internal security units in the East. They carry out rapid deployment missions with the Heer's Mountain Division and the Luftwaffe's Parachute Jager Divisions.

The Waffen-SS is defined in various German laws as "an independent organisation of the Schutzstaffel der NSDAP", "an integral arm of the German Wehrmacht", "a fully integrated component of the Reich's Security Forces", and the "body of German political fighters". Even thoguh they contradict each other, all of these are true.

From Section to Division, the Waffen-SS uses exactly the same organisations as the German Army. From SS-Schütze to SS-Gruppenführer every Waffen-SS soldier and officer fits into a hierarchy that exactly duplicates that of the Army. A Waffen-SS man's shoulder straps or chevrons and arm pips will tell you where he fits into this hierarchy. For instance, if Waffen-SS man's shoulder straps are those of an Army Colonel, then the SS officer commands a battalion.

There are in fact no Waffen-SS officers holding a substantive rank above SS-Gruppenführer. The five SS corps commanders appear to contradict this, however these officers merely hold temporary rank. The Stabschef der Waffen-SS is commissioned as an SS-Oberstgruppenführer in the Allgemeine-SS, which is fitting because the Kommandoamt der Waffen-SS is in fact a department of the Allgemeine-SS. This system appears to be convoluted, but it exists for a good reason. It is the reason the Waffen-SS still exists at all. This arrangement came from a compromise with the Wehrmacht. After the war, the Wehrmacht wanted to move back to its role as Germany's sole armed force. Hitler however always supported the SS as much as possible, on the grounds that it was being pressured and persecuted by the Army. As a rule, Hitler always supported the people and organisations in the party and state that everyone else opposed. The compromise was that the Waffen-SS would lose its tactical independence. The Army might pick a small number of distinguished SS division commanders to act as Corps Commanders, but the Corp Commander positions were Army positions, even if SS men filled them. The Army chooses SS men for Corp command on careful criteria. They must not be fervent National Socialists (loyalty to National Socialism is sufficient), they must be militarily highly skilled, they must not have gained advantage by political connections, they must have attended a Wehrmacht staff college (not an SS staff college), and they must be from Germany or a Germanic EU nation (i.e. Holland, Flanders, Norway, Denmark, Britain). Most importantly, they must never have served with the 3rd. SS Panzergrenadier Division Totenkopf. This division is recruited from concentration camp staff.

In the combat theatre, SS divisions report to their Corps Commanders. These men are the Army's men, regardless of the uniform. Each Corps can have Heer, Waffen-SS, or EU divisions. Each Corp of approximately three divisions is part of an Army of 5-9 divisions. One or more Armies combined with appropriate Luftwaffe units and Kriegsmarine fleets (and the allied equivalents) form a Front. Each Front reports to OKW which reports to the Reich Chancellor. This means that there are five layers of command before reaching the SS.

In the Reich Commisariats of Ostland and Ukraine, there are several independent SS battalions formed from German settlers. These are commonly known as "Lebensraum Battalionen". Most of the adult male German population of Ostland and Ukraine are members of a Lebensraum Battalion. These battalions form a local defence force for the German settlers to protect them against partisan attacks.

Most Waffen-SS equipment is identical to Army equipment. Some "ethnic" units of the Waffen-SS use weapons peculiar to them. For example, officers from the Legione SS Italiana often use the P 92 (i) (Beretta 92) pistol in preference to the Glock P 80. Italian officers also use the newer P 04 (i) (Beretta Px4). Belgian, and British Free Corps officers generally carry the Pistole 640(b) (Browning High Power) which is used by the Belgian and British Armies (and, ironically, by the armies of Canada, Australia, India, and New Zealand). The BFC also tend to use the British Sterling SMG, known as the MP 750 (e)

Divisions of the Waffen-SS 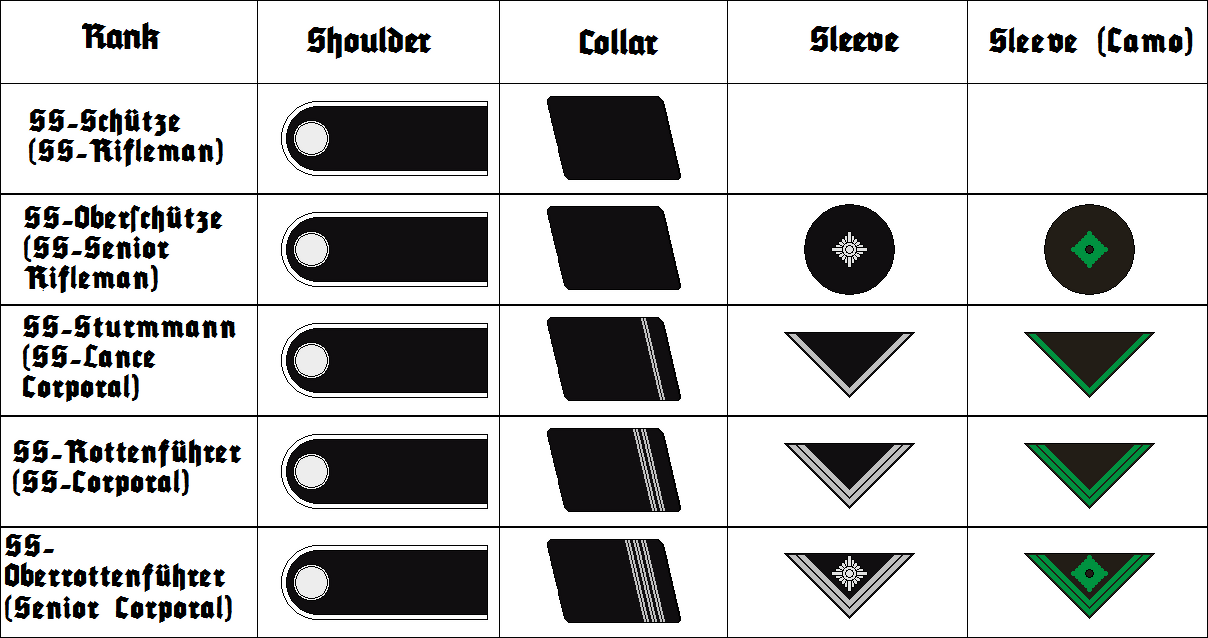 The rank of SS-Schütze is used by the infantry. Other titles are used in other corps, examples include SS-Kanonier in the artillery, SS-Panzergrenadier in the Panzer Grenadiers, SS-Pionier in the engineers, SS-Funker in signals, and SS-Sanitätssoldat for medics. 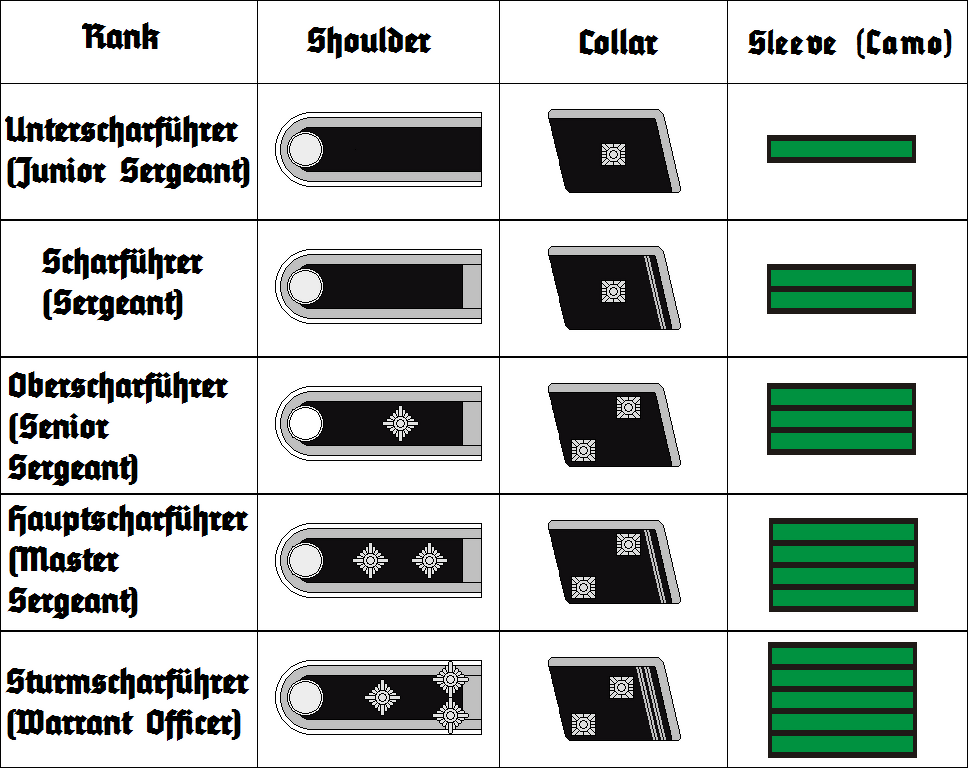 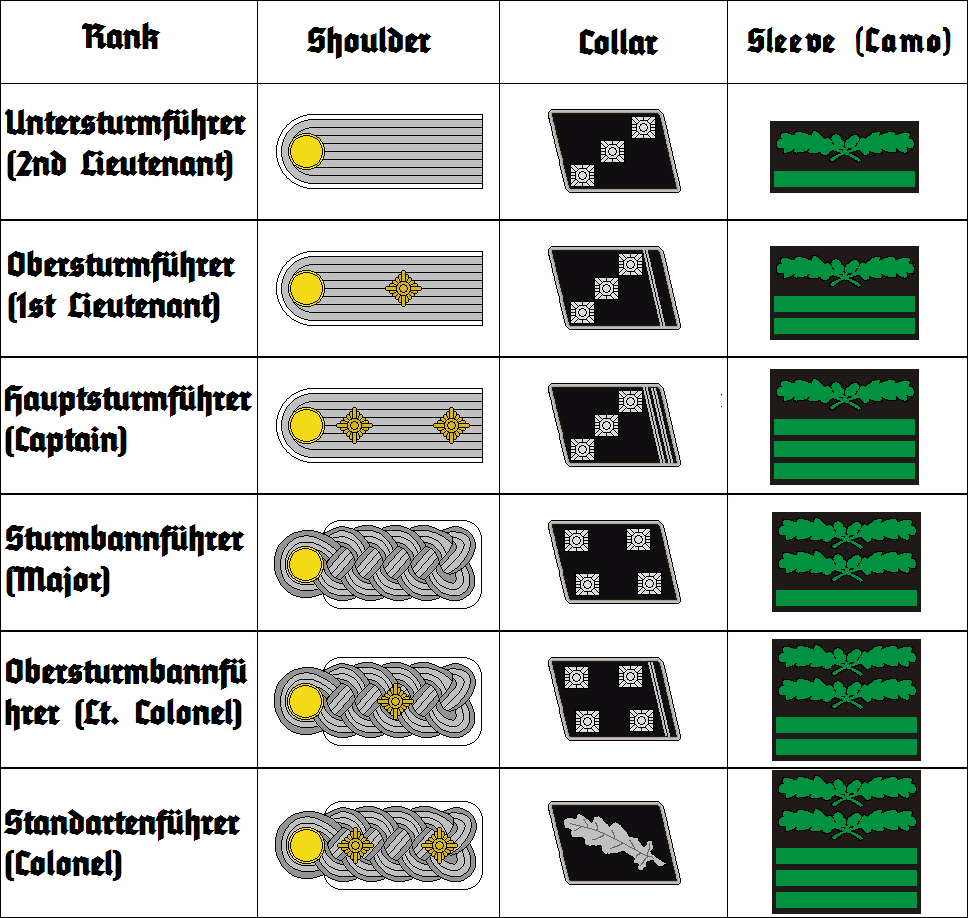 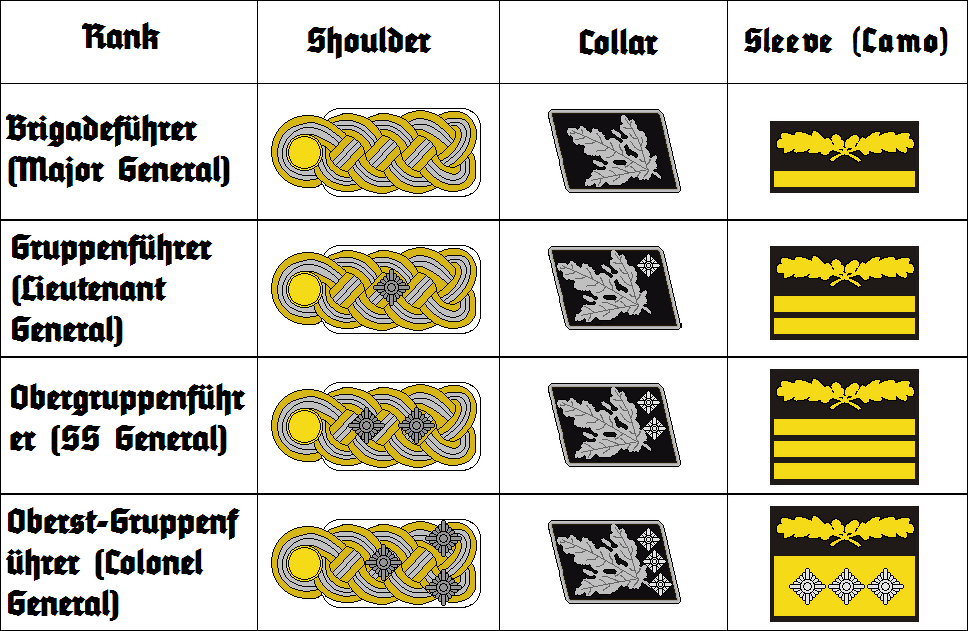 The rank of Oberführer used in the Allgemeine-SS is not used by the Waffen-SS as it has no direct Army equivalent. The ranks of Obergruppenführer and Oberstgruppenführer are not permanent ranks.

Waffen-SS uniforms are the same as the Army uniforms, but with SS insignia. Army Panzer uniforms in black are worn by tank crews as a service and ceremonial dress. Self-propelled artillery crews wear the Field Grey Panzerartillerie uniform (which has the same cut as the Panzer uniform). Foreign "Volunteer" units wear national emblems below their sleeve eagles. 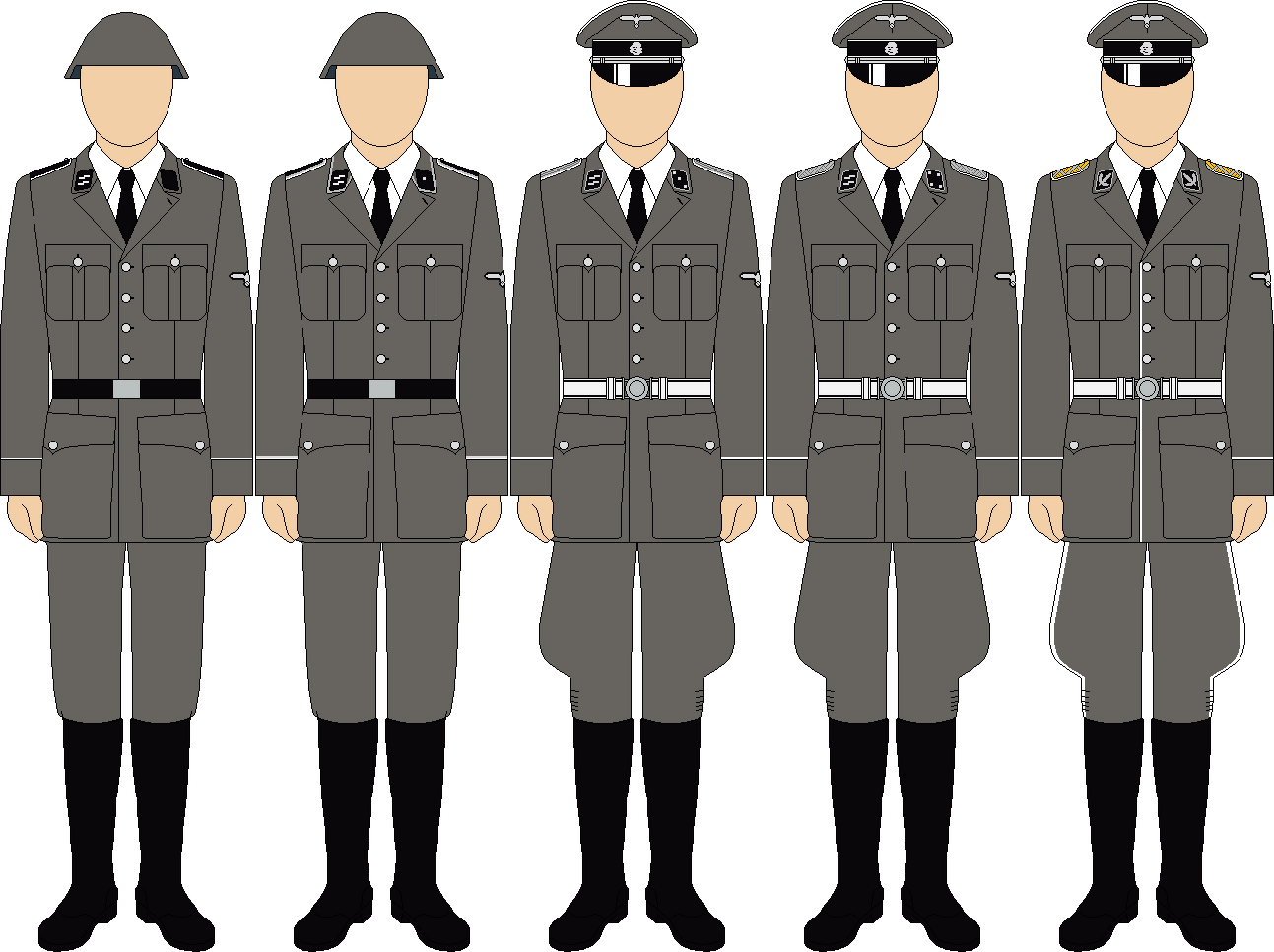 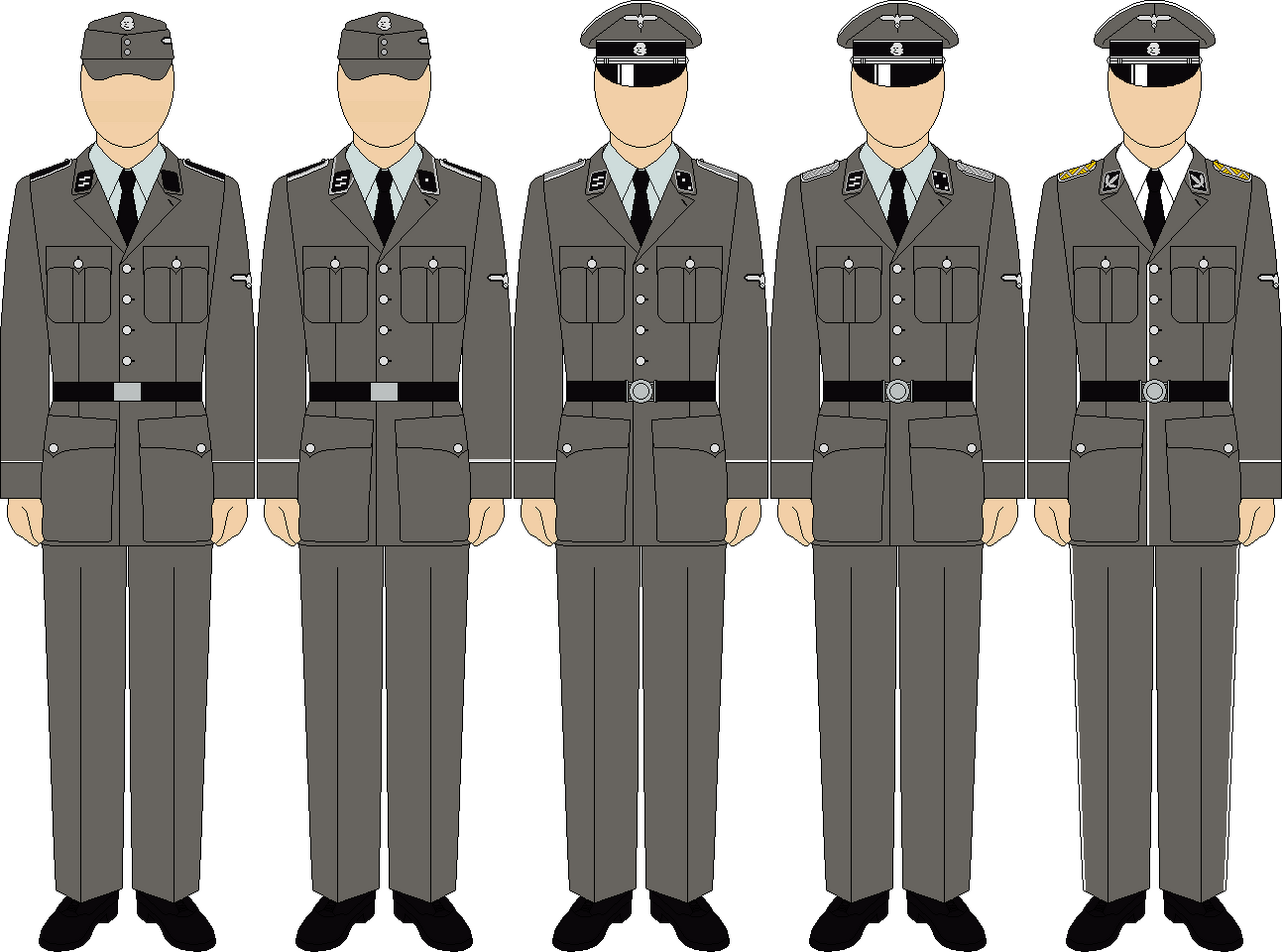 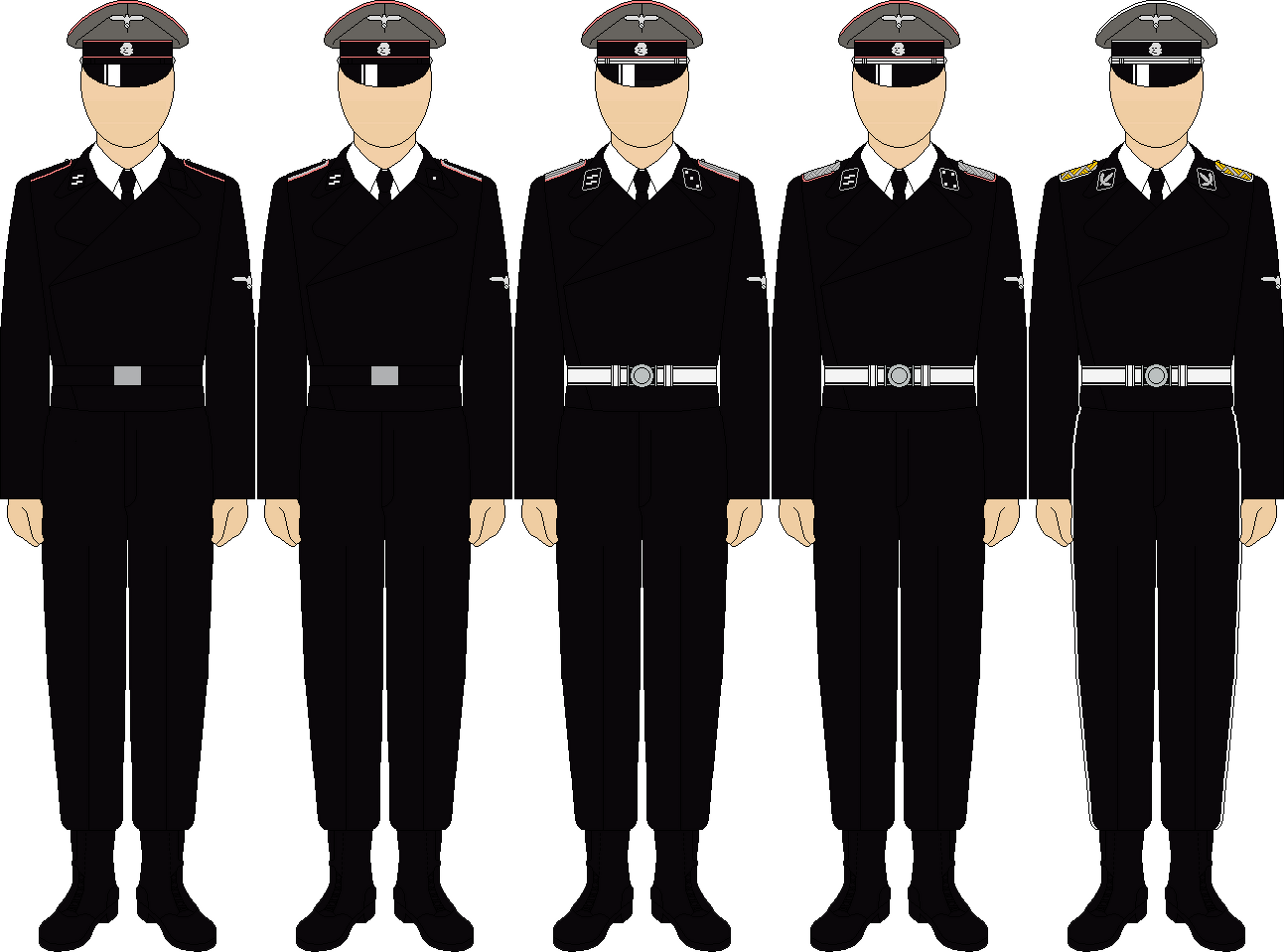 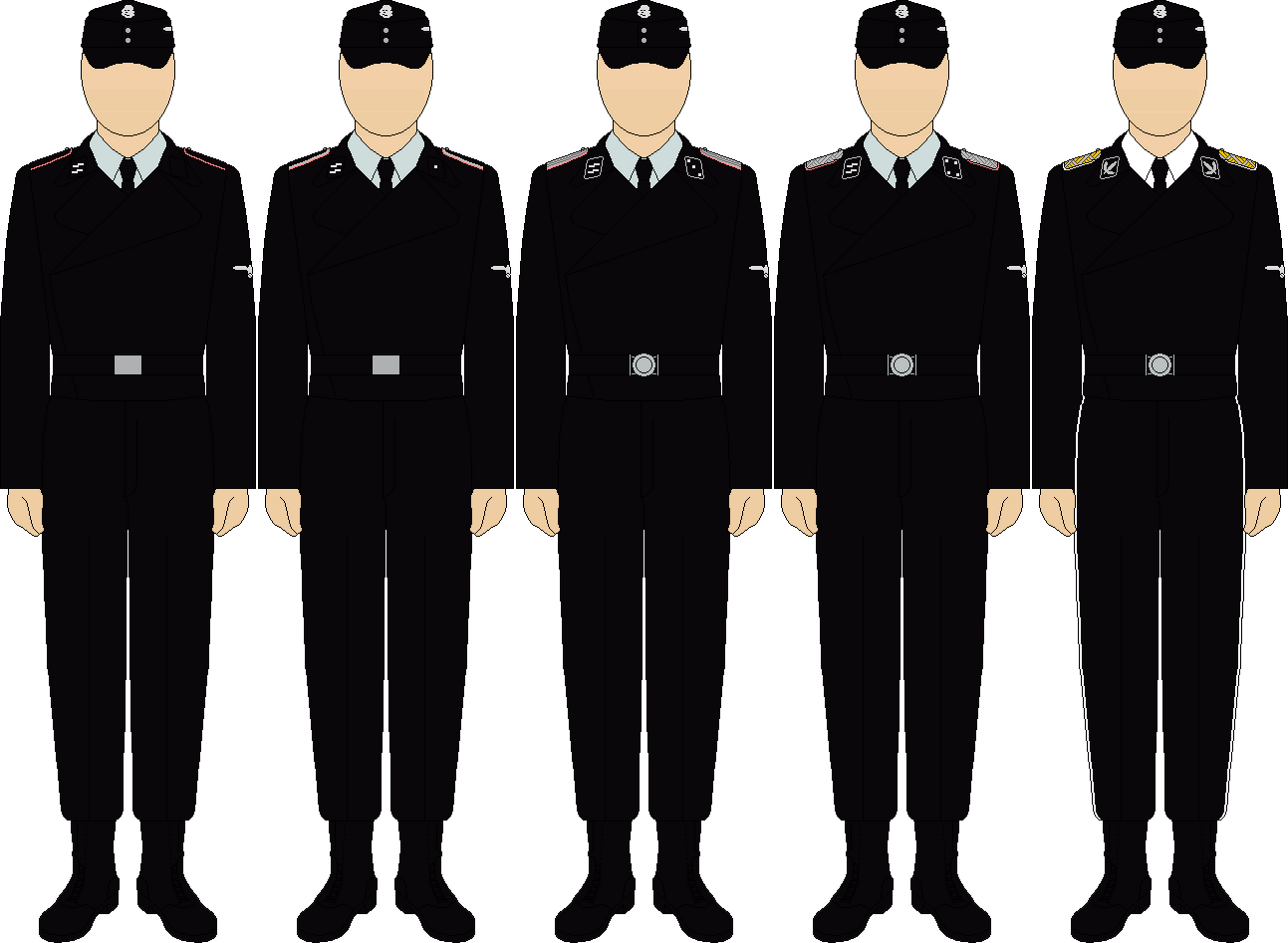 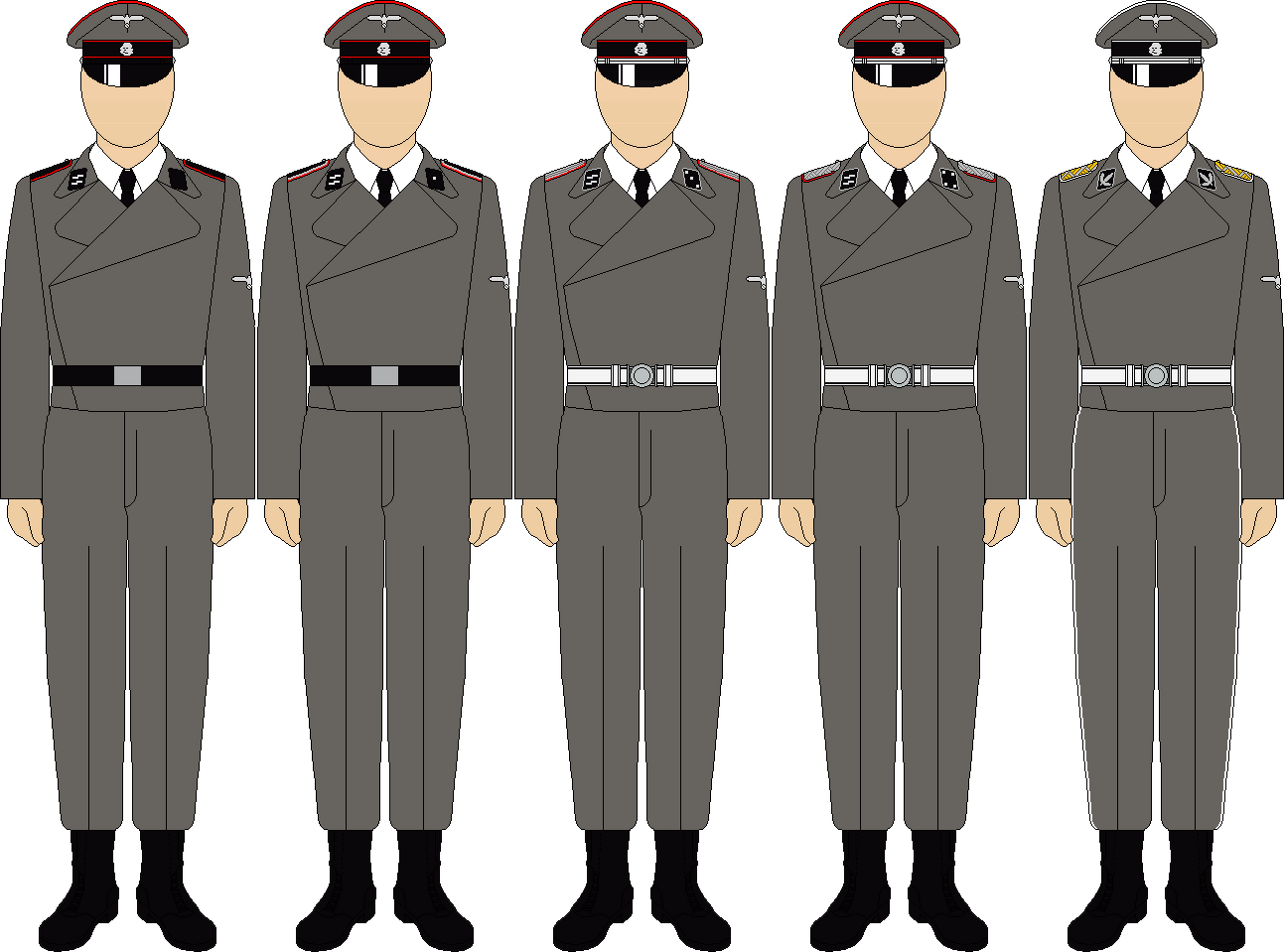 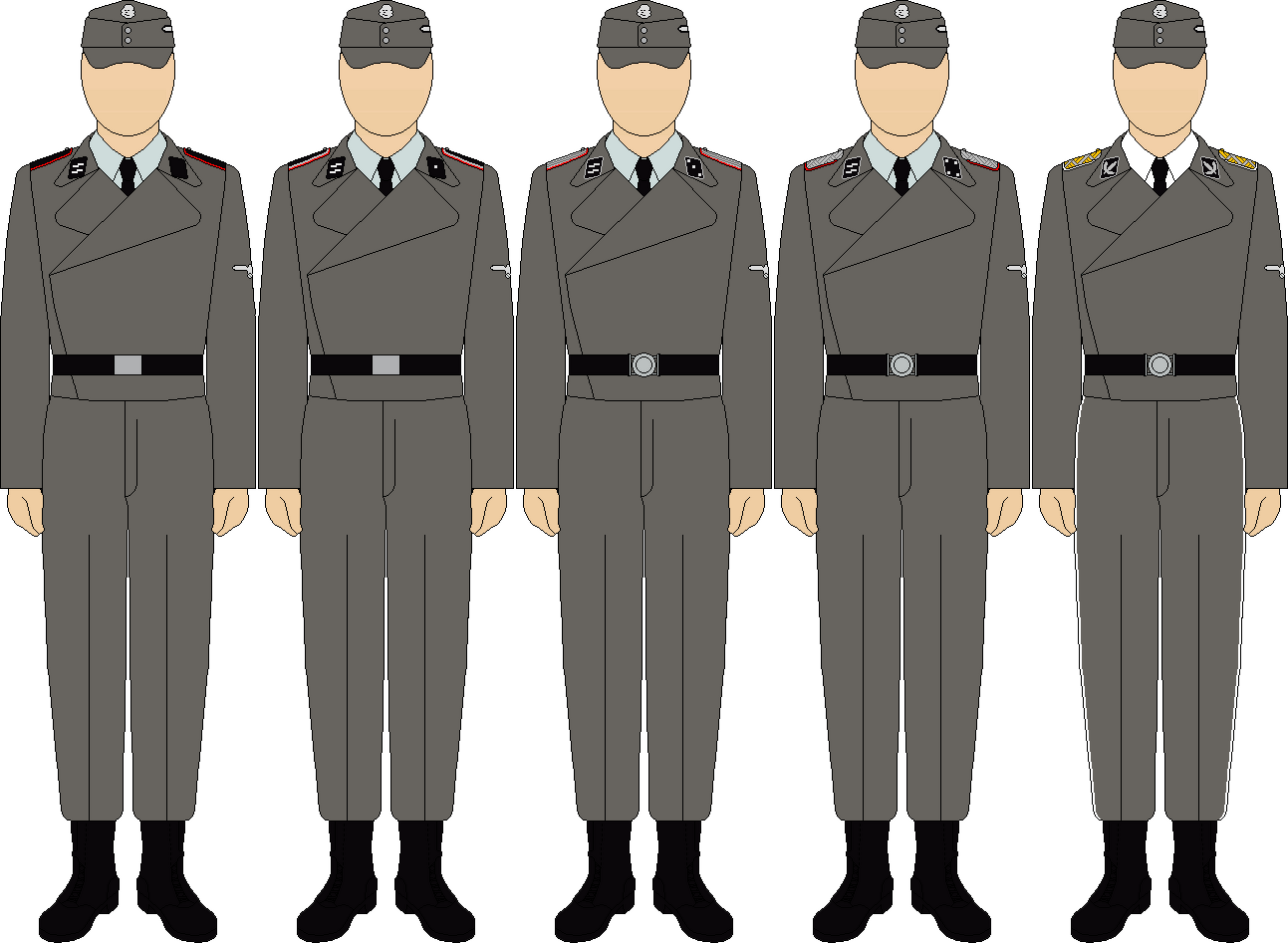 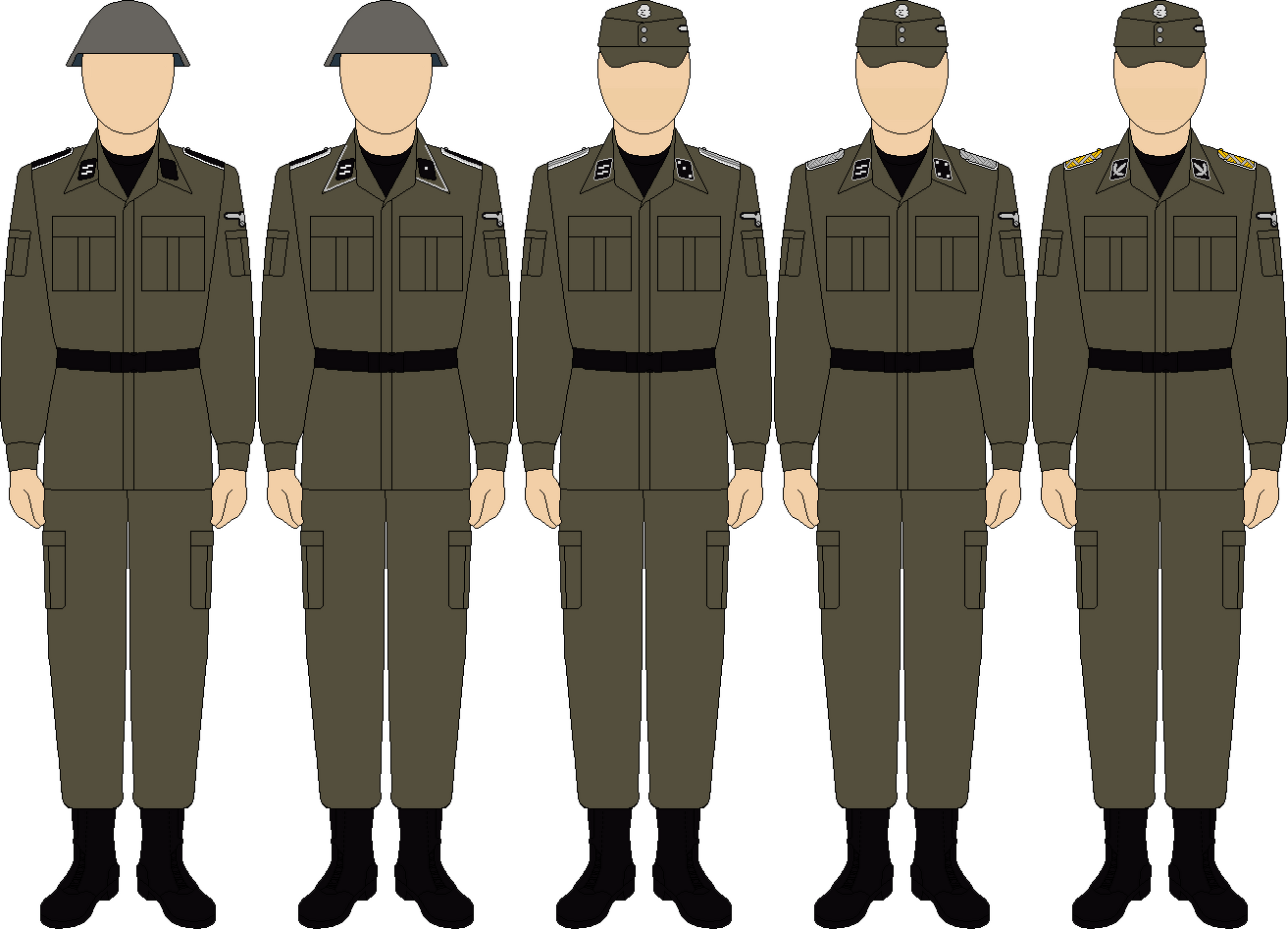 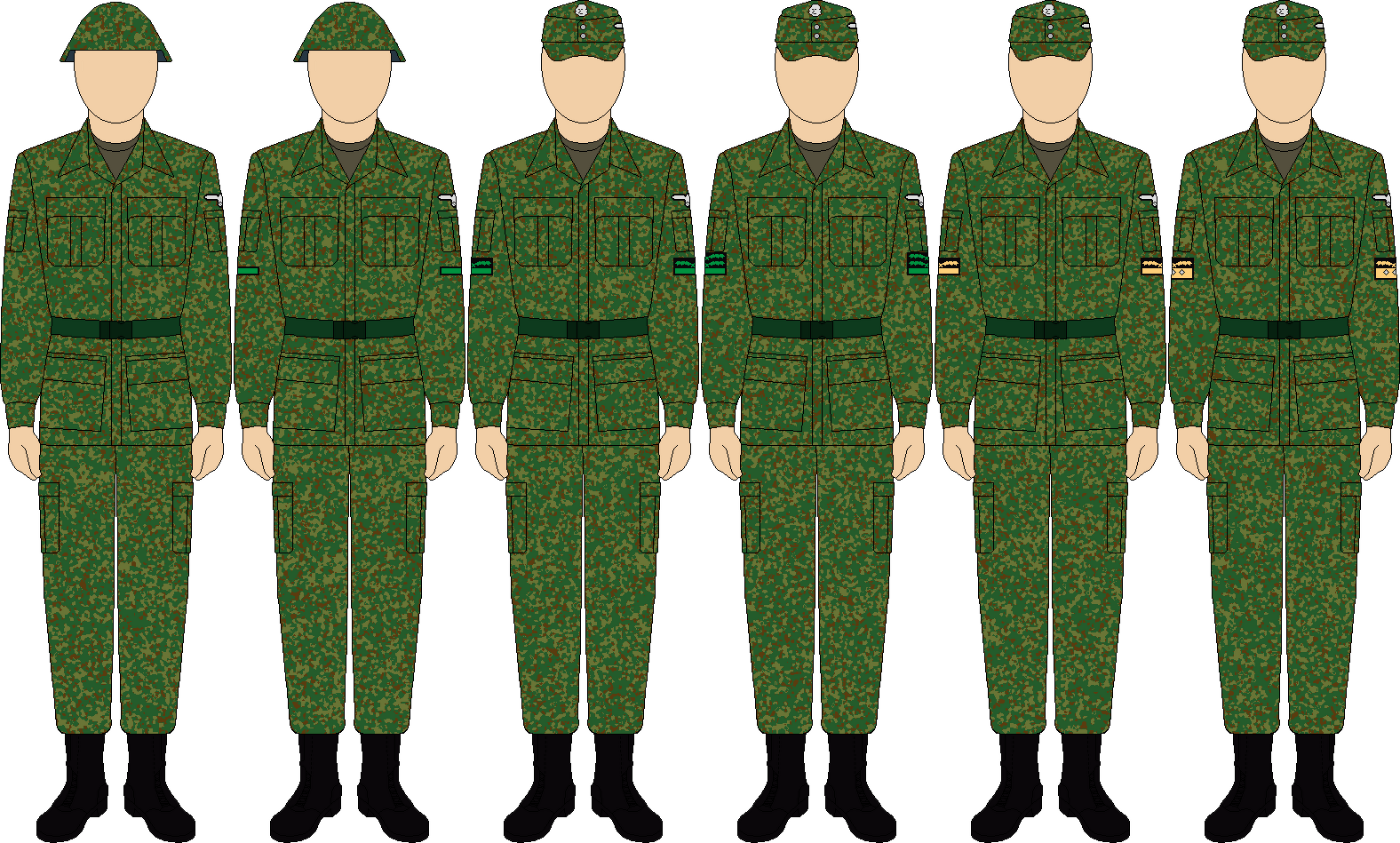 Combat Uniform - Desert and Alpine patterns are also available. The Waffen-SS use combat uniform as a "barracks dress"

Low-visibility SS insignia is worn. Camouflage uniforms serve as the combat dress of the Waffen-SS, and the barracks dress. Although Waffen-SS personnel are authorised to wear standard SS uniforms, the practice is almost totally unknown. To maintain a separate identity for the Waffen-SS, and to increase esprit de corps, Waffen-SS personnel always wear Army style uniforms. The only occasion in which a Waffen-SS member would wear a standard SS uniform would be an inbound transferee who had not received his Waffen-SS uniforms. Some foreign units of the Waffen-SS wear a distinctive SS eagle. The British Free Corp substitute the flash and circle of the British Union of Fascists for the Swastika. Hungarians wear the Arrow Cross in place of the swastika. Norwegian Waffen SS units use the eagle of Nasjonal Samling. Not all foreign units are extended this honour. It is typically awarded for excellence in combat.

Retrieved from "https://themarshall.fandom.com/wiki/Waffen-SS?oldid=9568"
Community content is available under CC-BY-SA unless otherwise noted.