The FAA is currently an mixed force, operating helicopters, and strike fighters from aircraft carriers, surface combatants, underway replenishment ships, and shore bases in both the following roles:

1Not part of the Fleet Air Arm, located for convience.

1Not part of the Fleet Air Arm, located for convience.

The RAN's Harrier force carries out the following missions:

S-70B-2 Seahawks are used for anti-submarine warfare, anti-surface warfare, search and rescue, vertical replenishment, boarding party support, and plane guard (on aircraft carriers). They are being replaced by S-70B-9 Seahawks. Both types serve side-by-side in the squadrons. There are three operational squadrons, an aircraft carrier squadron based at HMAS Albatross (with a detachment at HMAS Stirling), and two surface combatant squadrons (one on each coast). A single training squadron at HMAS Albatross provides conversion and crew training.

The RAN's AS 350BA Squirrel helicopters are used in the naval helicopter training role, and are based mostly at HMAS Albatross, though some are based at RAAF Fairbairn with the Defence Force Helicopter School. The Agusta A109E Power supports the Squirrel in 732SQN.

The Fleet Air Arm has two main bases, in line with the Two Ocean Navy Policy. HMAS Albatross (Naval Air Station East) in New South Wales supports units based at HMAS Kuttabul (Fleet Base East) in Sydney, New South Wales, most notably it is the land base for the air group of HMAS Australia. HMAS Albatross is also the Fleet Air Arm's headquarters, and training base. HMAS Stirling in Western Australia contains both a naval dockyard and a military airfield, and contains the West Coast based aircraft (most notably the air group of HMAS Vengeance). RAAF Pearce, and RAAF Williamtown also perform a training function for the RAN through the training of RAN fast jet pilots by 79SQN RAAF, and 76SQN RAAF. 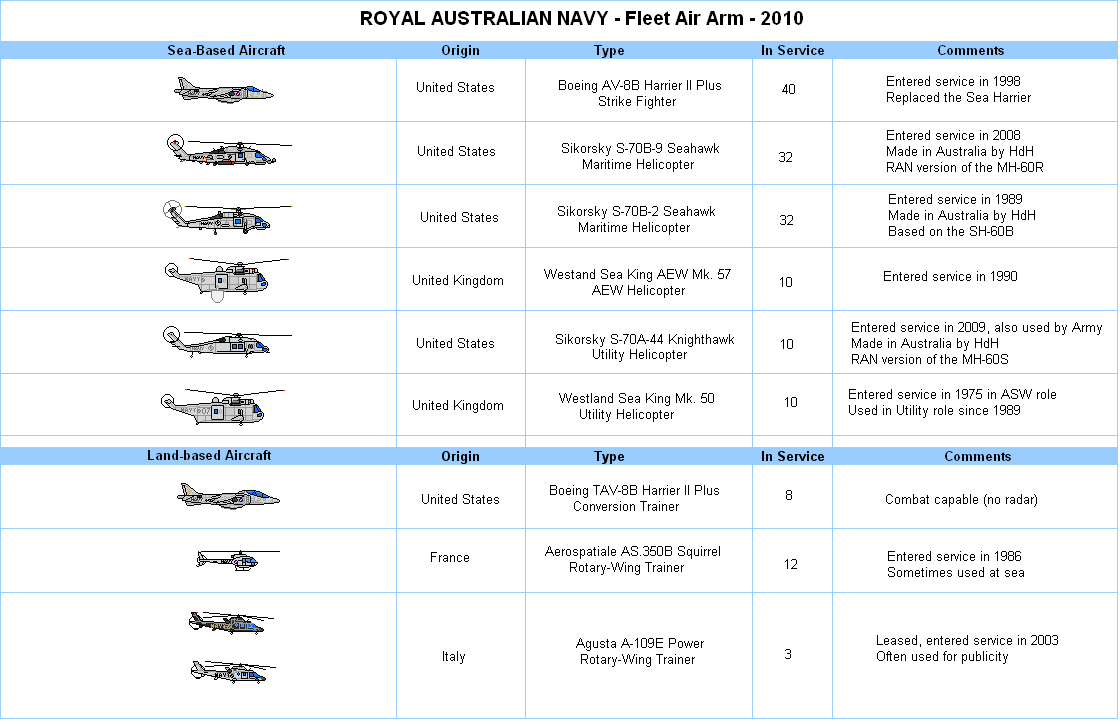 The Boeing/BAe AV-8B Harrier II Plus is the standard strike fighter of the Royal Australian Navy. It entered service in 1998 replacing the BAe Sea Harrier FRS Mk. 21 which had served the RAN since 1985. Although the Sea Harriers had plenty of fatigue life left in them, they lacked range (RAN doctrine stresses that tanking will not always be available), and beyond visual range capability. Their warload was also felt to be inadequate.

Both the British BAe Sea Harrier F/A.2 and American Boeing AV-8B Harrier II Plus were considered. The American Harriers also offered commonality with the USMC's Harrier force. Their APG-65 radars also offered commonality with the RAAF's Hornets, meaning that stocks of parts and trained technicians already existed in Australia. In addition, the Harrier II Plus had either twice the range or twice the warload of the Sea Harrier F/A.2. The all round superiority of the American Harrier made it an easy choice for the Marshall Defence Department.

The RAN's Harrier force has never seen combat, however in exercises, their performance has been excellent.

The RAN's Harrier force are primarily tasked with fleet air defence using the AIM-120 AMRAAM missile. Other taskings include maritime strike, and ground attack. Uniquely, the RAN Harriers are also used as minelayers. Land-based Harriers are used for fleet support (beside contracted Learjets), training for the Air Defence Regiments of the Royal Australian Artillery and Royal New Zealand Artillery.

The withdrawal of the offer to sell HMS Invincible came as a blow to the RAN, however the fantastic performance of the carrier during the Falklands War, and its Sea Harrier aircraft meant that the RAN wanted Harrier carriers. The Australian Government purchased two Principe de Asturias class carriers, 40 Sea Harrier FRS Mk. 21 aircraft, and 10 Harrier T Mk. 20. These were essentially identical to British Sea Harriers. Differences include the use of the Matra R550 Magic air to air missile, and the deletion of all electronics relating to the use of nuclear weapons.

The Sea Harrier entered service in 1985 on the newly commissioned HMAS Australia. The RAN's Sea Harriers performed well in service and saw combat in the 1991 Gulf War. Unlike the A-4 Skyhawk, the RAN did not lose a single Sea Harrier. The reason for this is that the Majestic class aircraft carriers were designed for propeller driven fighters such as the Seafire and the Sea Fury but Melbourne found itself operating fast jets. The Invincible class aircraft carriers were designed for Sea Harriers. In addition, the relative youth, safety, reliability, and ease of operation of the Invincible class carriers has meant that the RAN has an effective carrier force of at least one ship all year round. Sterling efforts from the crews of Australia and Vengeance have meant that on occasions, the RAN is able to use two carriers simultaneously.

The replacement of the Sea Harrier had been an obvious point since it entered service. Its capabilities as a fighter were marginal at best, and only the lack of modern aircraft and high skills in the other air arms in the region had made it competitive. Nevertheless, the replacement of the Sea Harrier had not been considered due to the lack of viable STOVL fighters equipped with radar. Several unsolicited offers of AV-8B Harriers were made, but without a radar, the RAN wasn't interested. The introduction of the AV-8B Harrier II Plus piqued the Navy's curiosity, and during 1995 the Harrier II Plus was selected as a replacement fighter. The Sea Harrier was retired from RAN service in 2000. Most were sold to the Indian Navy as spares aircraft. Several remain in Australia as gate guards, and display aircraft. In addition, two are flying in private hands, one in RN markings, the other in the distinctive blue and grey RAN camouflage.

The A-4G Skyhawk served the RAN between 1967 and 1984 on three carriers, Melbourne, Australia, and Vengeance. They also served with the RAAF in ground attack alongside the A-4K Skyhawk between 1988 and 1991. Eight A-4G Skyhawks were purchased in 1967 to replace the De Havilland Sea Venom on HMAS Melbourne. Two TA-4G trainers were procured to support them. In 1971, a further eight A-4G and two TA-4G were purchased.

Unlike American Skyhawks, the Australian Skyhawks had a fleet defence role, armed with Sidewinder missiles. Melbourne would generally embark four Skyhawks. The remainder would operate from HMAS Albatross. The TA-4G was not well-balanced enough to operate from Melbourne. They participated in a number of exercises over the next eleven years, and one third of the force were lost in crashes. The root cause of these crashes was the age and unreliability of the Melbourne, and the fact that it was really too small for an aircraft like the Skyhawk.

After the retirement of HMAS Melbourne, the surviving Skyhawks were placed in storage while a buyer was sought. The RNZAF purchased them in 1984. The Skyhawks served with the RNZAF (alongside fourteen A-4K Skyhawks from New Zealand) for four years and in 1988 became part of the RAAF. They soldiered on until 1995 when the RAAF ceased to operate specialised ground attack aircraft. There are currently four G-model Skyhawks flying in Australia, two with the RAN Historic Flight. One TA-4K is flying in New Zealand.

The S-2 Tracker entered RAN service in 1967 as a replacement for the Fairey Gannet. They have operated from HMAS Melbourne, HMAS Australia, and HMAS Vengeance, as well as from the land bases of HMAS Albatross, RAAF Pearce, and HMAS Fremantle in the training and coastal patrol roles. The RAN has operated 30 Trackers (and variants). The RAN has lost only one Tracker in flight, although 10 were destroyed by arson in 1976. 14 S-2E Trackers were ordered introduced in 1967. Six S-2 Trackers were ordered in 1976 (the order was increased to 16 after the hangar fire). These were frequently embarked on Melbourne, and provided an excellent ASW capability. Although they appeared to be less advanced than the Fairey Gannets they replaced (the Tracker for instance has piston engines rather than the turboprops of the Gannet), its electronics were better.

The retirement of HMAS Melbourne in 1984 meant the end of the line for the Trackers. They were retained for another two years as coastal patrol aircraft until the role was taken over by Customs. The RAN has two Trackers in its historical flight.

The Sikorsky S-70, which is manufactured in Australia by Hawker De Havilland, is the ADF's standard medium helicopter. In the RAN, it replaced three types (Westland Sea King, Westland Wessex, Westland Scout). It has replaced the Sea King twice (first in the anti-submarine role, and now in the utility role), and in the anti-submarine role is replacing a previous version of itself. The RAN operates three versions of this versatile helicopter:

During 1990, the RAN bought another 10 Sea Kings equipped with the Searchwater radar. These were designated AEW Mark 57. They are used on Australia's two aircraft carriers as airborne early warning aircraft. While they lack the capability of the E-2C Hawkeye (or the RAAF's Wedgetail) they can be used on Australia's carriers.

During the mid-1990s, the anti-submarine Sea Kings had their anti-submarine equipment removed, and the helicopters were now to be used as utility aircraft They were replaced in the anti-submarine role by the S-70B-2 Seahawk. Australia has lost a number of utility Sea Kings in accidents, and they are not being replaced with the Hawker de Havilland/Sikorsky S-70A-44, Australia's version of the MH-60S Knighthawk, so the S-70 has replaced the Sea King twice.

The S-70 will not however replace the Sea King a third time. The AEW Sea Kings will soldier on for several years to come.

Aerospatiale AS-350B Squirrel is the RAN's training helicopter. The RAN's Squirrels train Navy helicopter pilots who previously qualified on Army Squirrels. They have also operated from Adelaide class frigates during the 1991 Gulf War. Although the Squirrel is not designed for shipboard operation (or carrying weapons) MAG 58-armed Squirrels provided top cover for boarding parties in the Red Sea. They are popularly known as the "Battle Budgie".

Retrieved from "https://themarshall.fandom.com/wiki/Royal_Australian_Navy_Fleet_Air_Arm?oldid=7831"
Community content is available under CC-BY-SA unless otherwise noted.