The present Commander in Chief of the Luftwaffe is Generalfeldmarschall Arne Kreuzinger-Janik.

The Luftwaffe is divided into several regional air fleets (Luftflotten). The Luftwaffe Air Fleets are assigned to OKE and to its subordinate fronts. Some air fleets contain all of the aircraft under a particular front, while others contain some of the aircraft in a front. Each Air Fleet contains its own depot level facilities, and support units. The Air Fleets also control their own light Flak and FlaRak units that defend Luftwaffe bases from air attack.

Luftflotte 2 is assigned to OK Süd, and is based in Italy. Luftflotte 2 is primarily a command formation. Its peacetime German assets include a Geschwader of Tornados (probably intended for nuclear strike, as the Italian Air Force (Aeronautica Nazionale Repubblicana) has several Gruppi of its own Tornados), a number of command aircraft (converted Airbus A310 aircraft), a Geschwader of tankers, and a small Staffel of liaison aircraft. Its main wartime role would be to control the Aeronautica Nazionale Repubblicana, and parts of the French Armée de l'Air, and the Spanish Ejército del Aire.

Luftflotte 3 is Germany's strategic transport force. It is assigned directly to OK Europa and supports all other fronts. During wartime, it would control the strategic transport aircraft of all EU air forces. In peacetime, LF3 can charter civil aircraft. Lufthansa is the primary recipient of these charters, however other EU airlines can be used (for instance, support for German forces in Cuba is usually done by Air France, KLM, or British Airways). In wartime, civil airliners are requisitioned by the EU's armed forces. LF3 controls most of those airliners. Smaller regional airliners, however, can be parceled out to the various Fronts.

The Reichsluftverteidigungkommando (Reich Air Defence Command) is assigned to OK Zentral and is the German component of Europäische Luftverteidigungskommando (European Air Defence Command). It maintains a network of radars covering the skies from the Arctic Circle to the Canary Islands, and from the western coast of Ireland to Theoderichshafen (Sevastopol). It also maintains a group of ballistic missile warning radars.

Its forces include interceptors, and surface to air missiles. Interceptors include the Panavia Pa 200J Tornado (also known as the Tornado ADV or Tornado LVV) used for long range patrol and the Messerschmitt Me 663 used for shorter range engagements. Surface to air missiles cover key points. The Luftwaffe operates long range mobile SAMs and a small (but growing) number of missile defence interceptor missiles.

Luftflotte 7 was formed to support the Atlantic Front. It was disbanded in the late 1960s when the Kriegsmarine Naval Air Service took over all maritime aviation tasks.

The Strategic Missile Command is the counterpart of LF5. As its name implies, it operates intercontinental ballistic missiles. Some of its missiles are based in Germany, but most are based in the General Government, Ostland, and the Ukraine. This decision was taken in order to safeguard German cities from the effects of a "counterforce" strike. This decision was flawed due to the fact that the ground nuclear bursts required to destroy missile silos produce massive amounts of fallout, which would drift to Germany and Western Europe, but the silos were nonetheless built.

Today, only a small number of German ICBMs are silo-based. Most of Germany's current ICBM force is mobile.

Luftflotte 9 is the third Luftflotte assigned to OK Ost. It includes the transport, refueling, airborne early warning, and battlefield surveillance aircraft of the Eastern Front. It also contains a force of Arado Ar 534 strategic bombers, intermediate range ballistic missiles and Tornado strike aircraft. These are believed to act as a "Front Commander's discretionary strike force".

Luftflotte 10 contains training and liaison squadrons. It is based in Germany and reports to OK Zentral. It also performs the Luftwaffe's VIP role.

Luftflotte 11 is primarily based in Norway and supports the Northern Front. It is commanded by OK Nord. Like LF2, LF11 is small. It has a small number of strike aircraft, plus command aircraft and tankers. This is not a great disadvantage in wartime, as LF11 would incorporate the Norwegian Air Force.

Luftflotte 12 is assigned to OK Ost in the Eastern Front. It's role is to support the two southern Armies on the Eastern Front. It is equipped with fighters strike aircraft, and close support aircraft. It also has a number of medium bombers. Support aircraft include electronic warfare and reconnaissance aircraft. It is smaller than Luftflotte 1. In wartime, it would incorporate the Romanian, Hungarian, and Bulgarian air forces.

Luftflotte 13 is the newest German Air Fleet. It is based in German Palestine and supports the South Eastern Front under the command of OK Südost. It operates across the Middle East, providing support to the air forces of Iraq, Syria, and Egypt. In wartime it includes the Italian units in Italian East Africa and French units in Lebanon. In a Middle Eastern conflict, these Axis forces are intended to contain Saudi Arabia and the Arabian Emirates. 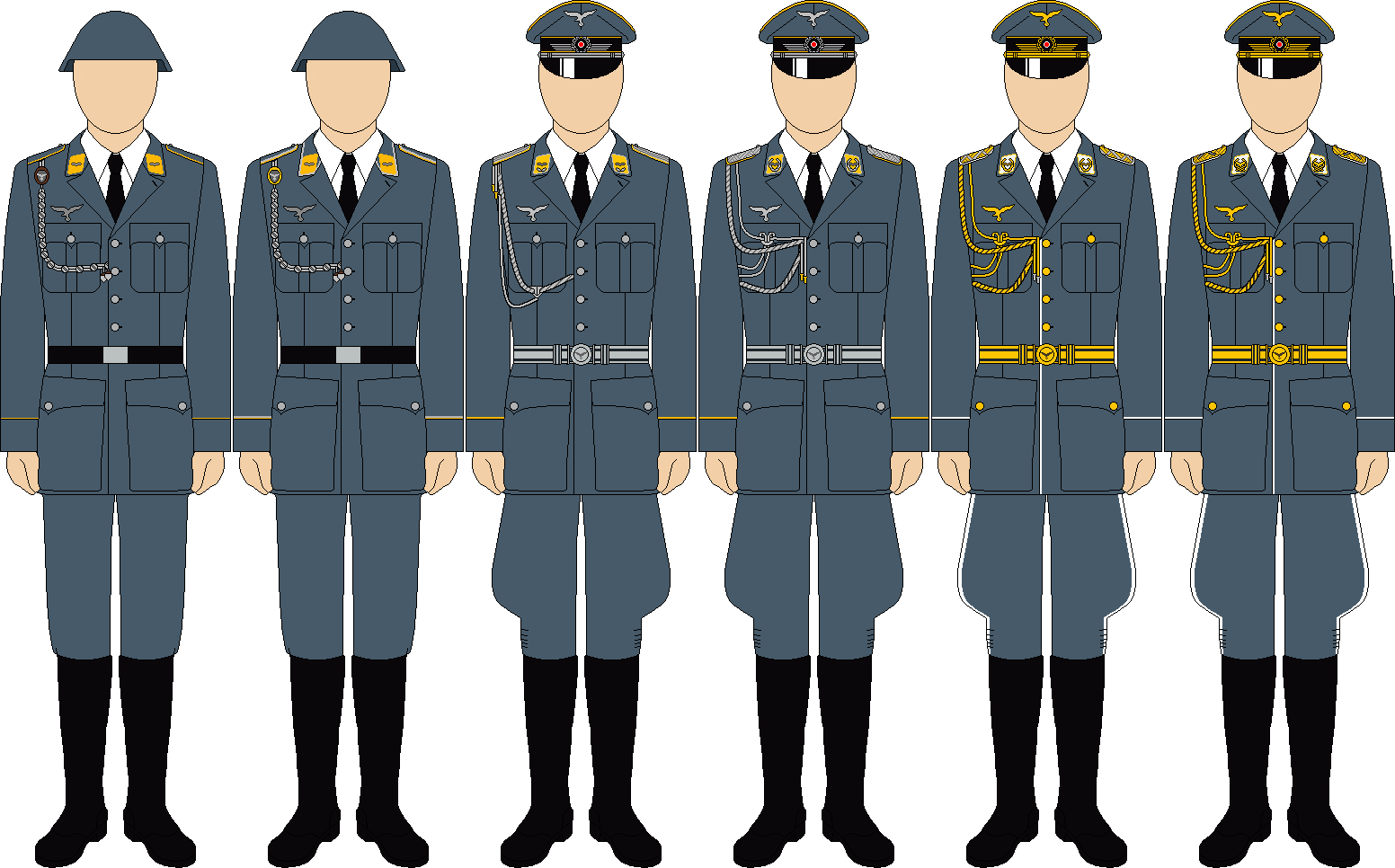 Ceremonial Uniform - Worn with breeches and jackboots as a ceremonial uniform, or trousers and boots as a service uniform. 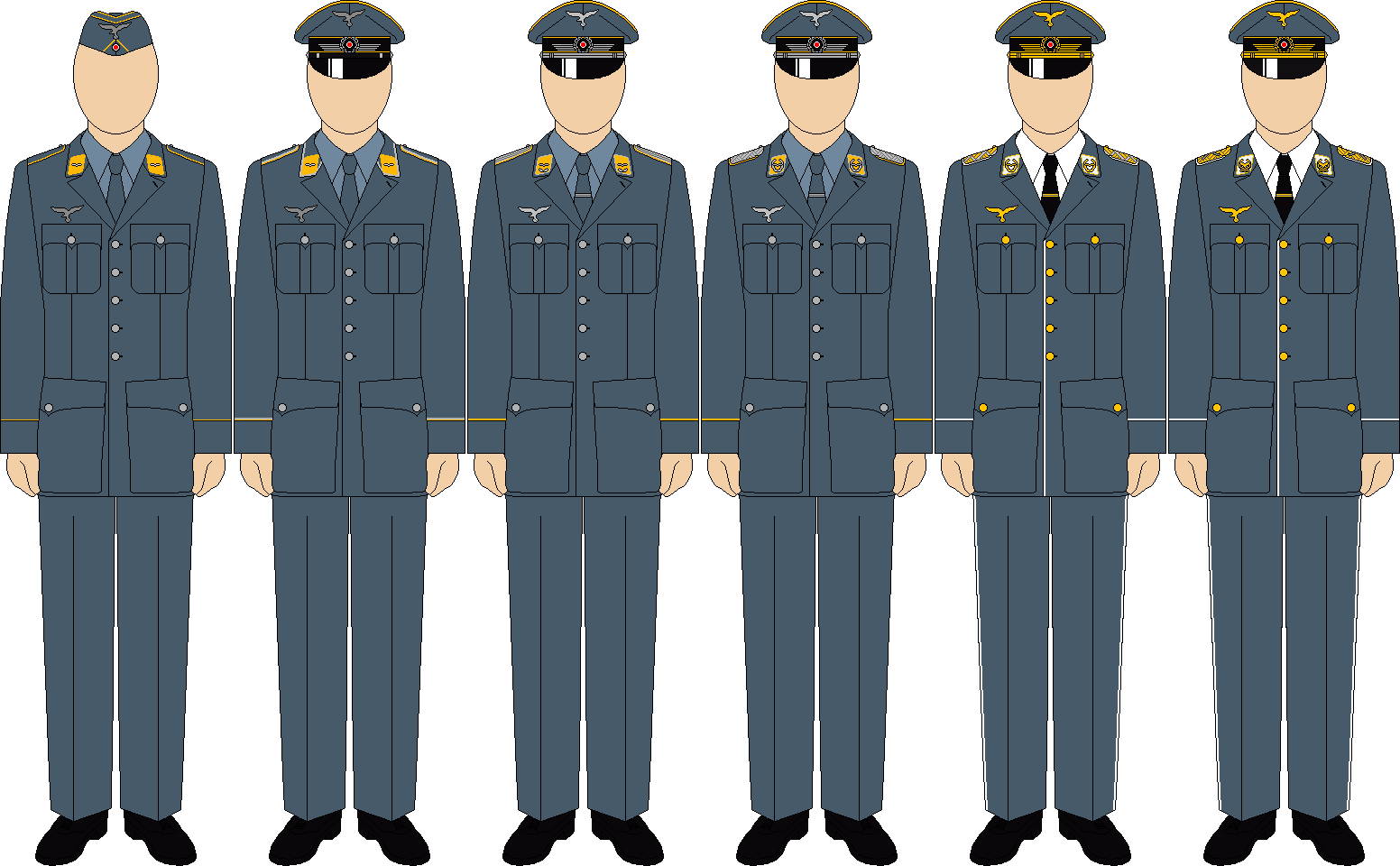 Service Uniform - Also may be worn with a Side Cap or a Field Cap.

Flying Suit - Worn by all personnel working on service aircraft. Used by the Heeresflieger, and the National Socialist Flying Corps with appropriate insignia. 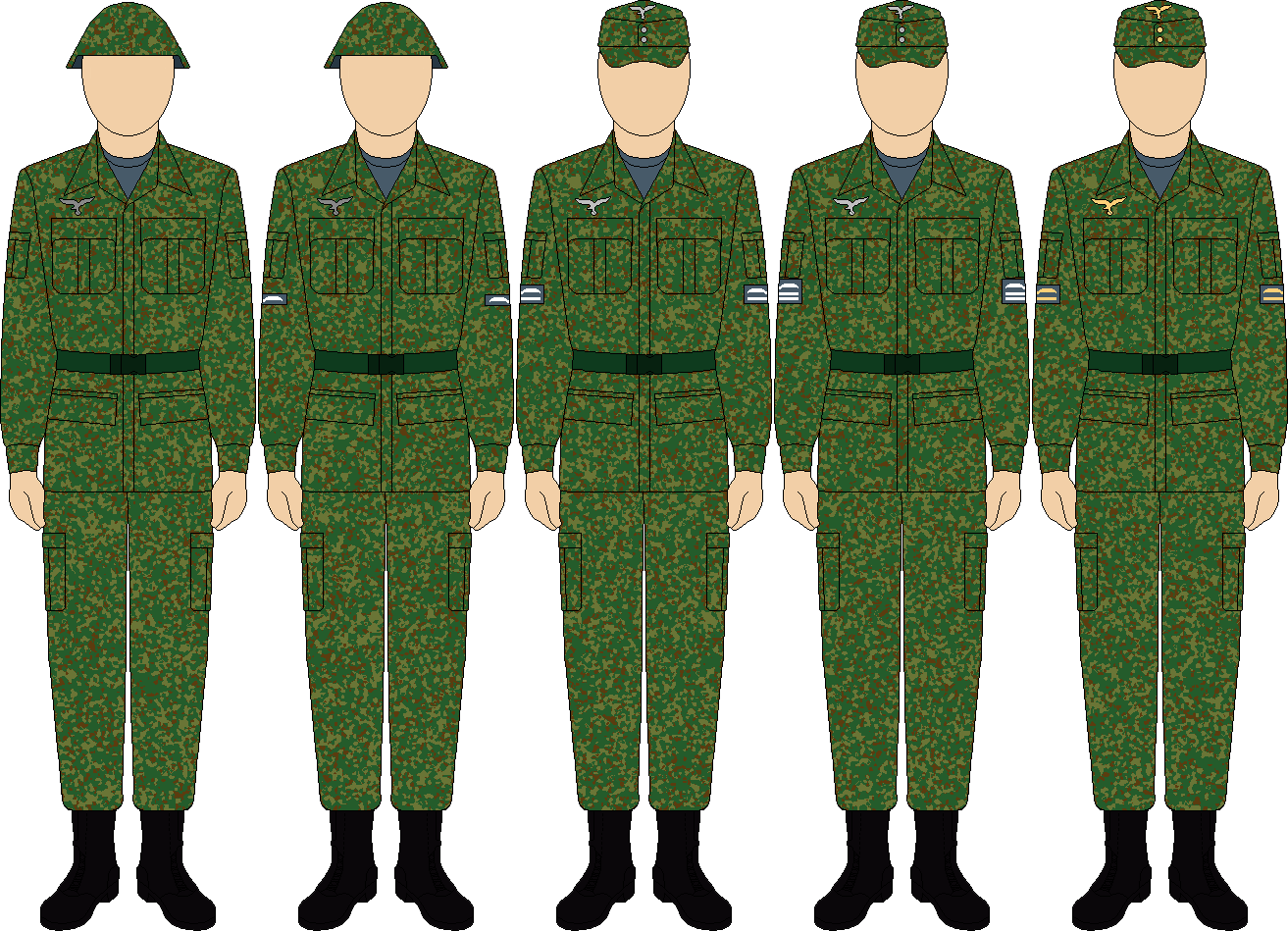 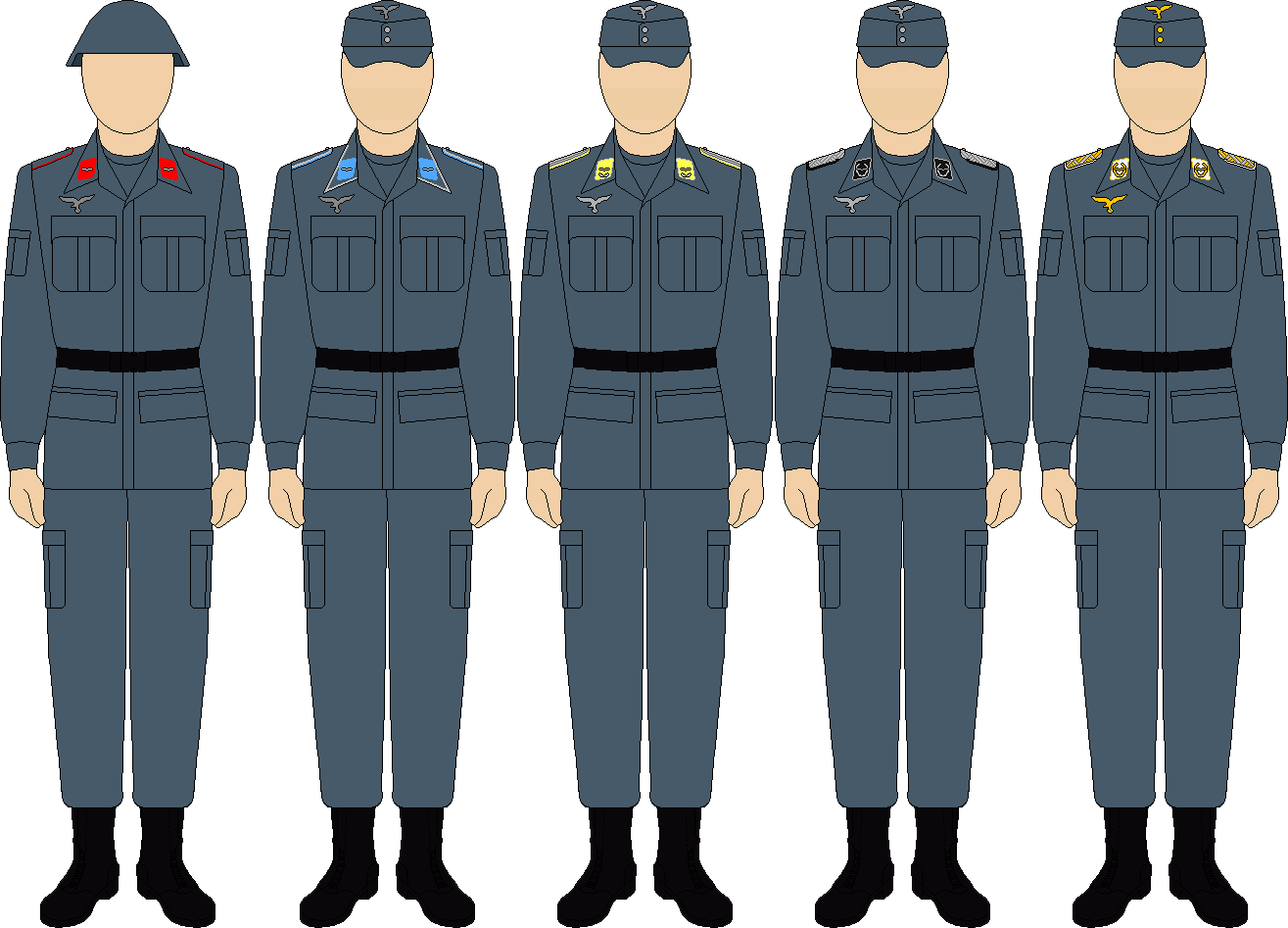 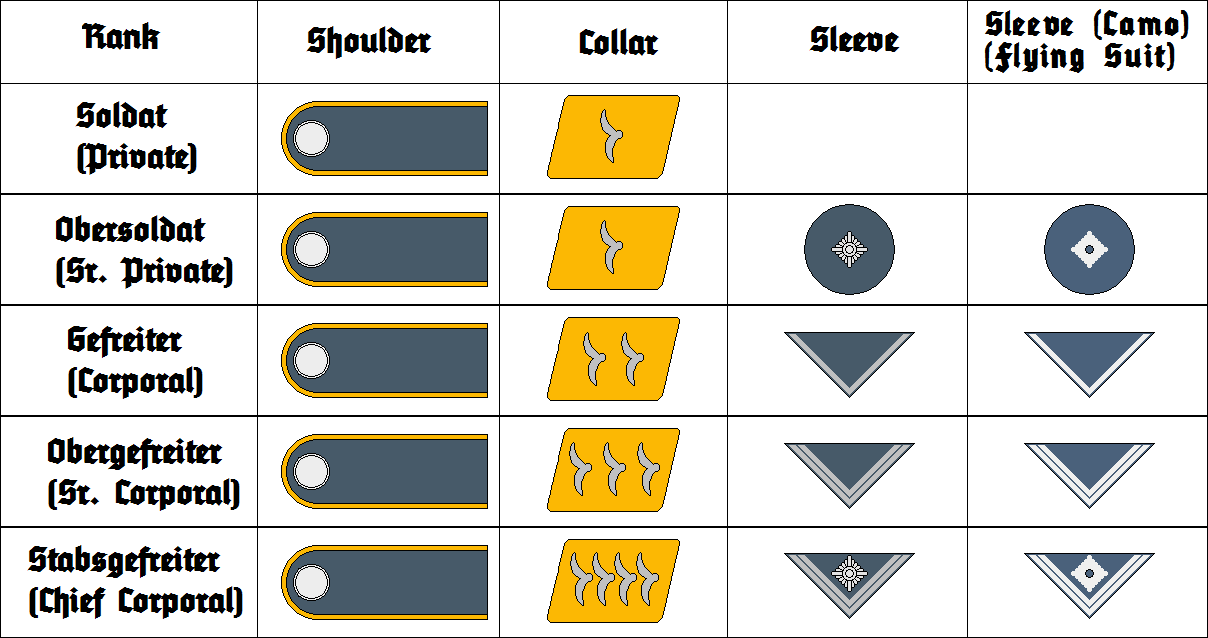 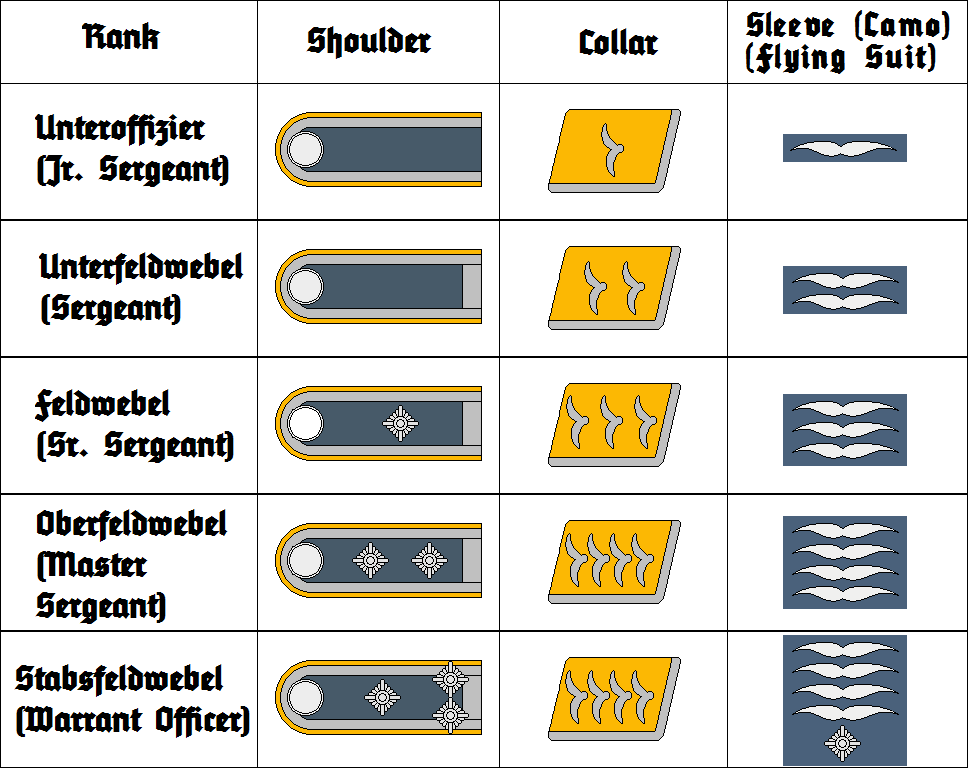 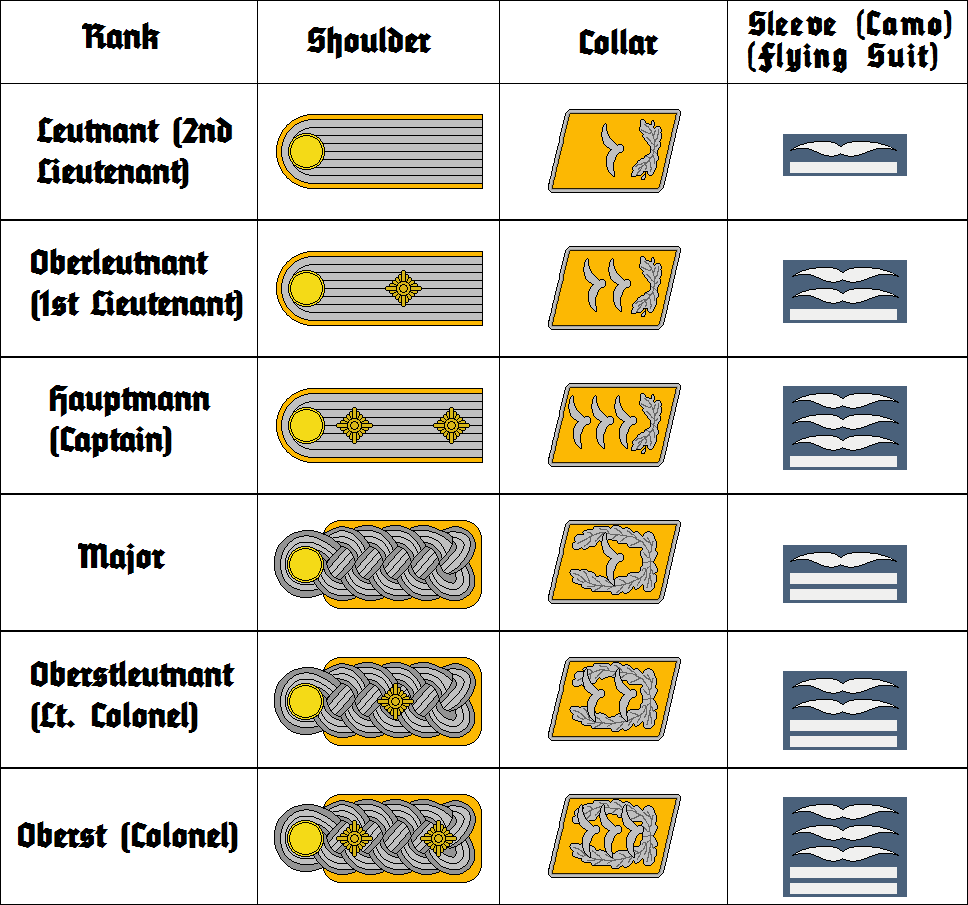 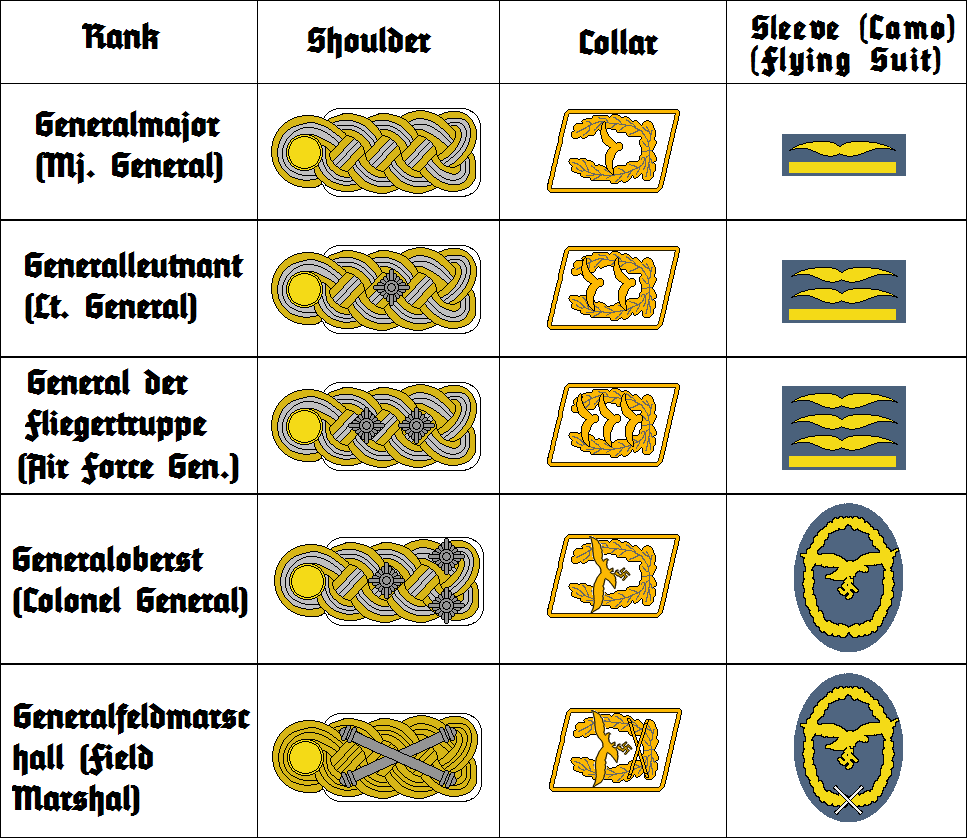 Retrieved from "https://themarshall.fandom.com/wiki/Luftwaffe_(Third_Reich)?oldid=9666"
Community content is available under CC-BY-SA unless otherwise noted.