The Kriegsmarine is the navy of National Socialist Germany. It supersedes the Kaiserliche Marine of World War I and the post-war Reichsmarine. The Kriegsmarine is one of three official branches of the Wehrmacht, the unified armed forces of Nazi Germany.

The Kriegsmarine is one of the most powerful navies in the world, however the bulk of its surveillance and fighting capability is above and below the waves. During the Second World War, the surface fleet was largely ineffective, while the Ubootwaffe, and the Luftwaffe's Focke-Wulf Fw 200 Condors took a heavy toll of Allied shipping. The fall from grace of Hermann Goering allowed the Kriegsmarine to gain control over naval aviation. This led the Kreigsmarine to define its post-war structure. Its surface forces are small, and oriented towards combat in the North Atlantic. The Kriegsmarine's real power rests in the Marineflieger (Naval Flyers), and the Ubootwaffe (U-Boat Arm). Unlike the Heer, and the Luftwaffe, the Kriegsmarine does not take a domineering position over allied European services, preferring a more collegial arrangement. This enables the experience of traditional maritime powers such as Britain, France and Italy to inform the Kriegsmarine.

Its land-based Naval Air Service allows it to project power over vast distances. Its largest aircraft range out over every ocean, able to record ship movements and electronic signals, as well as attack surface and sub-surface targets. Shorter-range aircraft operate over the Baltic, Mediterranean, and the North Sea. Its U-Boats, both conventional and nuclear-powered take their traditional place in the German fleet, that of compensating for weaknesses on the surface. Since the end of the war, the U-Boat service has dominated the Kriegsmarine, with the AUBR-Boot taking the place of the battleship as the capital ship of the Kriegsmarine. They are the only U-Boats ever to receive names (as opposed to U-numbers).

The operational forces of the Kriegsmarine are divided into Fleets. One fleet contains all the naval forces of a Wehrmacht front. This means that fleets vary greatly in size, ranging from the massive Atlantikflotte down to the small Baltische Flotte. The commander of a Fleet reports to the Front commander, who in turn reports to the Supreme Commander Europe

The German Navy has the following arms of service:

The German Navy is organised into fleets to support OKE's fronts. Listed below is each fleet with its relevant front:

The Baltic Fleet has a larger allocation of minesweepers, mine layers, E-Boats, patrol boats, and conventional U-Boats. It has two German frigates. Uniquely, it has coastal anti-ship missiles. Its naval aircraft allocation consists of small patrol aircraft (principally the Dornier Do 328M), naval attack aircraft (the Panavia Pa 200 Tornado) and helicopters. The Baltic Fleet also commands two brigades of naval infantry. The Baltic Fleet commands the Royal Danish Navy in wartime, which provides four extra frigates in addition to other forces. The Baltic Fleet supports the Eastern Front.

The Black See Fleet supports the southern flank of the Eastern Front. Like the Baltic Fleet, its German element is quite small (though somewhat larger than the Baltic Fleet). It is based at Theoderichshafen, Gotenland (Sevastopol, Crimea). The small size of its German forces is no great weakness, as in wartime the Black Sea Fleet includes the navies of Romania, and Bulgaria. The Black Sea Fleet has one Brigade of Naval Infantry based at Theoderichshafen, Gotenland (Sevastopol, Crimea).

The Indian Ocean Fleet supports the South Eastern Front. In a major war, its role would be to stop American support for Saudi Arabia and the Arab monarchies. It is based in Mogadiscio, Italian East Africa. In wartime, many of its ships and aircraft would be Italian. Germany maintains naval bases in Haifa, German Palestine; Karachi, Pakistan; Umm Qasr, Iraq; Port Said, Egypt; Suez, Egypt; and Yangon, Myanmar. Most of Germany's surface naval forces are deployed in the Atlantic. Because Germany lacks the resources to build enough ships to cover all the world's oceans, the Indian Ocean Fleet is primarily equipped with long range naval aircraft.

Germany's surface forces consist of aircraft carriers, cruisers, destroyers. It's littoral forces consist of missile-armed S-boats, and minehunters. The role of the surface forces is to support the U-boat force, to transport and support amphibious forces, and to carry out air defence at sea. The surface force's anti-submarine capability consists of lightweight torpedoes launched from surface ships, and anti-submarine helicopters, in contrast with Russia and the League of Democracies, who have great faith in thrown weapons, and anti-submarine missiles. The core of the surface force is the air defence oriented K-82 class cruiser, armed with the Seepfeil missile. They are large, well-armed ships with extensive command facilities. Four of the ships have hangars for two Puma-sized helicopters (Ostpreußen subclass), the other four are equipped with 12 Kormoran anti-ship missiles (Wien subclass). The high price of these ships limited their numbers, with only 8 built out of 20 planned. The bulk of the destroyer force is the Z-42 class destroyer, also armed with Seepfeil, and carrying a Luchs-sized helicopter. The Kriegsmarine has 20 of these ships. To replace both the Z-82 and Z-42, the Kriegsmarine intends to acquire 20 Z-45 destroyers which will carry the Aster missile. The Z-45 program has run into serious delays and cost overruns.

Backing up the destroyers, are the frigates. They are used for anti-submarine warfare, and anti-surface warfare. The Kriegmarine's primary frigate is the F-122 class. It is equipped with the Himmelblitz surface to air missile for self-defence, and the Kormoran anti-ship missile. They carry up to 2 Luchs helicopters. The Kriegsmarine has 24 F-122 frigates. The Kriegsmarine intends to replace them with the F-125 class, but (as with the Z-45), the program has run into serious hurdles, and only five are in service after ten years of construction.

The U-boat is one of the most important types of ships in the Kriegsmarine. With it, Germany nearly won two world wars, and it may play a major role in a third world war. Germany operates three types of U-boats:

Coastal U-Boats are used for minelaying, coastal patrol and defence, inserting special forces team, and training. Training is probably their most important role, as aircraft have taken over most of its other roles. Coastal U-Boats train both submariners and anti-submarine warfare forces. All coastal U-boats are diesel-electric powered. This is due to cost, the lack of need for trans-oceanic range, and a lower noise level. Many of Germany's European allies operate similar U-Boats.

All oceangoing U-boats are nuclear powered (Atom U-Boote, or AU-Boote). Its missions include anti-submarine warfare, anti-surface warfare, and commerce raiding. AU-Boats are the most numerous U-Boats.

The Marineflieger is Germany's naval air arm. It is the second most powerful naval air arm in the world (after United States Naval Aviation). It's composition and use stems from Germany's history of naval weakness. Germany believed that the cost of matching the US Navy ship for ship would cripple Germany's economy. Aircraft were an asymmetrical response to American strength. It is divided into four arms:

The Marineinfanteriekorps consists of seven brigades of ground specialising in amphibious operations. Four brigades are assigned to the various fleets. One Brigade is assigned directly to OK Europa as a special intervention force. The seventh brigade is the Kampfschwimmer Abteilung. This is Germany's naval special forces unit, and is assigned to OK Europa.

The German Navy possesses a large number of small combatants. Missile armed fast attack craft (E-Boats in the English-speaking world, S-Boote for the Germans) are common in the Baltic and Black Sea Fleets. Minelayers are also common in the Baltic. German fleets working in German territory have squadrons of mine countermeasures ships. These include the Baltic, Black Sea, and Indian Ocean Fleets. For convenience, the Baltic Fleet's anti-mine coverage extends to Germany's North Sea coast. The German Navy has few patrol boats. This task is left to the Wasserschutzpolizei (Water Protection Police) forming a type of "SS Navy".

The Kriegsmarine Coastal Branch is responsible for operating coastal artillery, and providing protection for Kriegsmarine bases from ground and air attack. Coastal artillery provides a permanent and highly reliable defence for the restricted waters of the Baltic Sea. Historically, this force has consisted of fixed fortifications with heavy calibre guns. The modern German coastal artillery force uses mobile guns and missiles. The 20-ton SdKfz.730 half track is the main vehicle of the coastal artillery. It is used as the basis of a 15 cm Coastal Gun, a 9-round launcher for the Kormoran anti-ship missile, surface search radar, and command vehicle. Practically all of this force is assigned to the Baltic Fleet. Two Coastal Defence Regiments are assigned to the Black Sea Fleet as well. Because they are shore-based, Coastal Artillery wear Field Grey. The Coastal Branch operate anti-aircraft guns and surface to air missiles to defend Kriegsmarine bases from air attack. They also have several battalions of Naval Security Troops. They protect naval bases, and mount a ceremonial guard for Kriegsmarine headquarters.

The Kriegsmarine operates all over the world, and has its own integrated air force and army, and thus has the widest selection of uniforms. 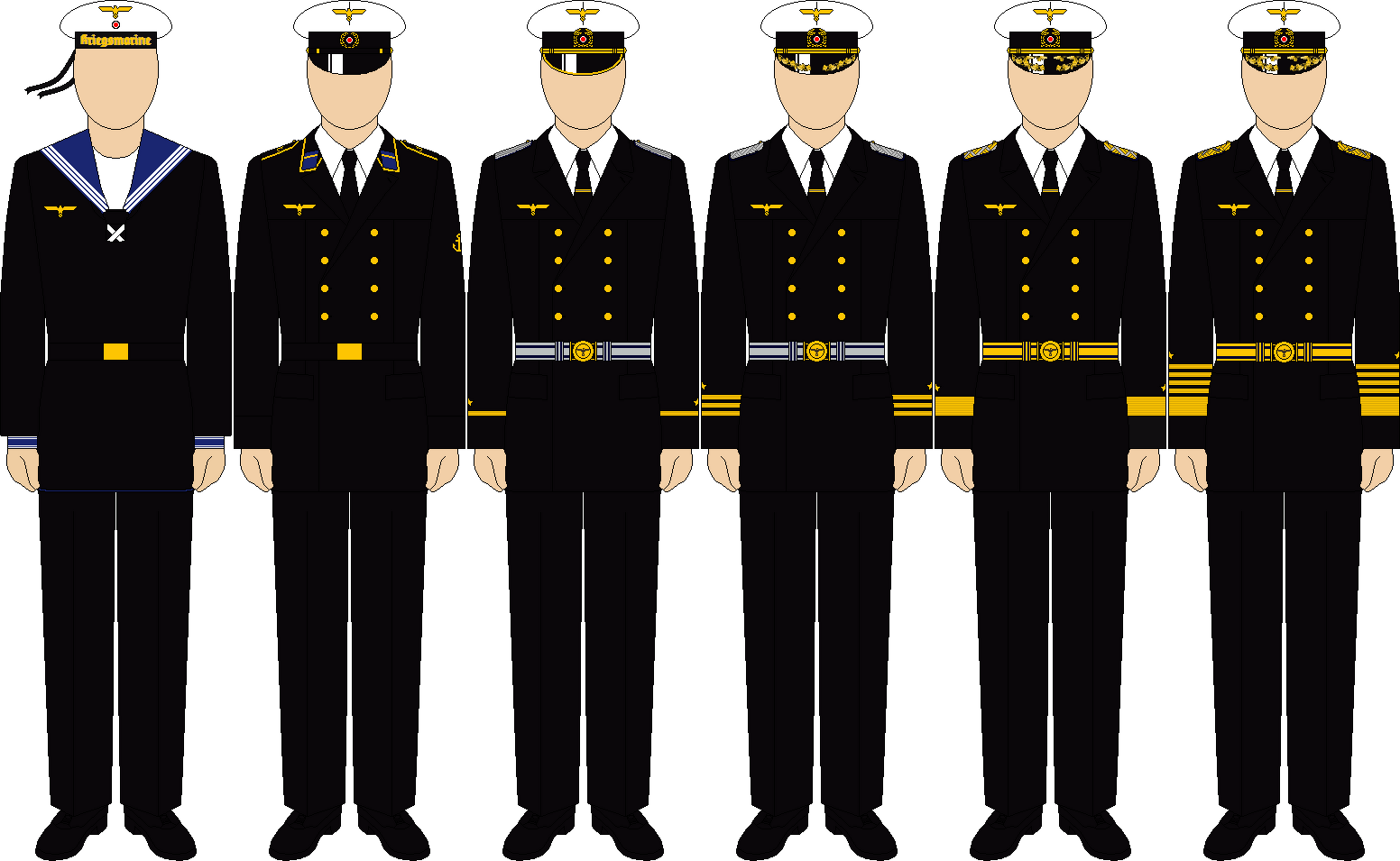 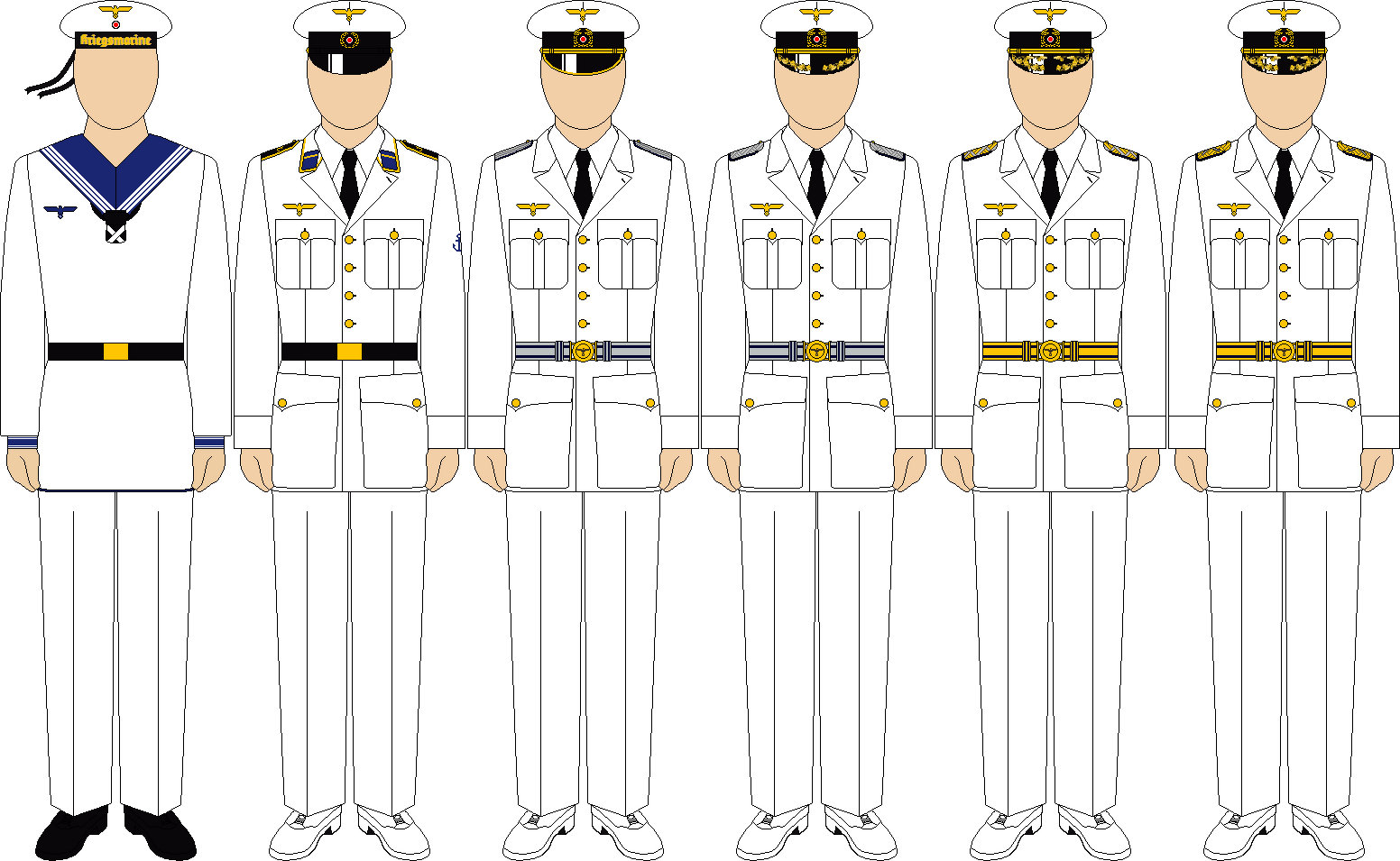 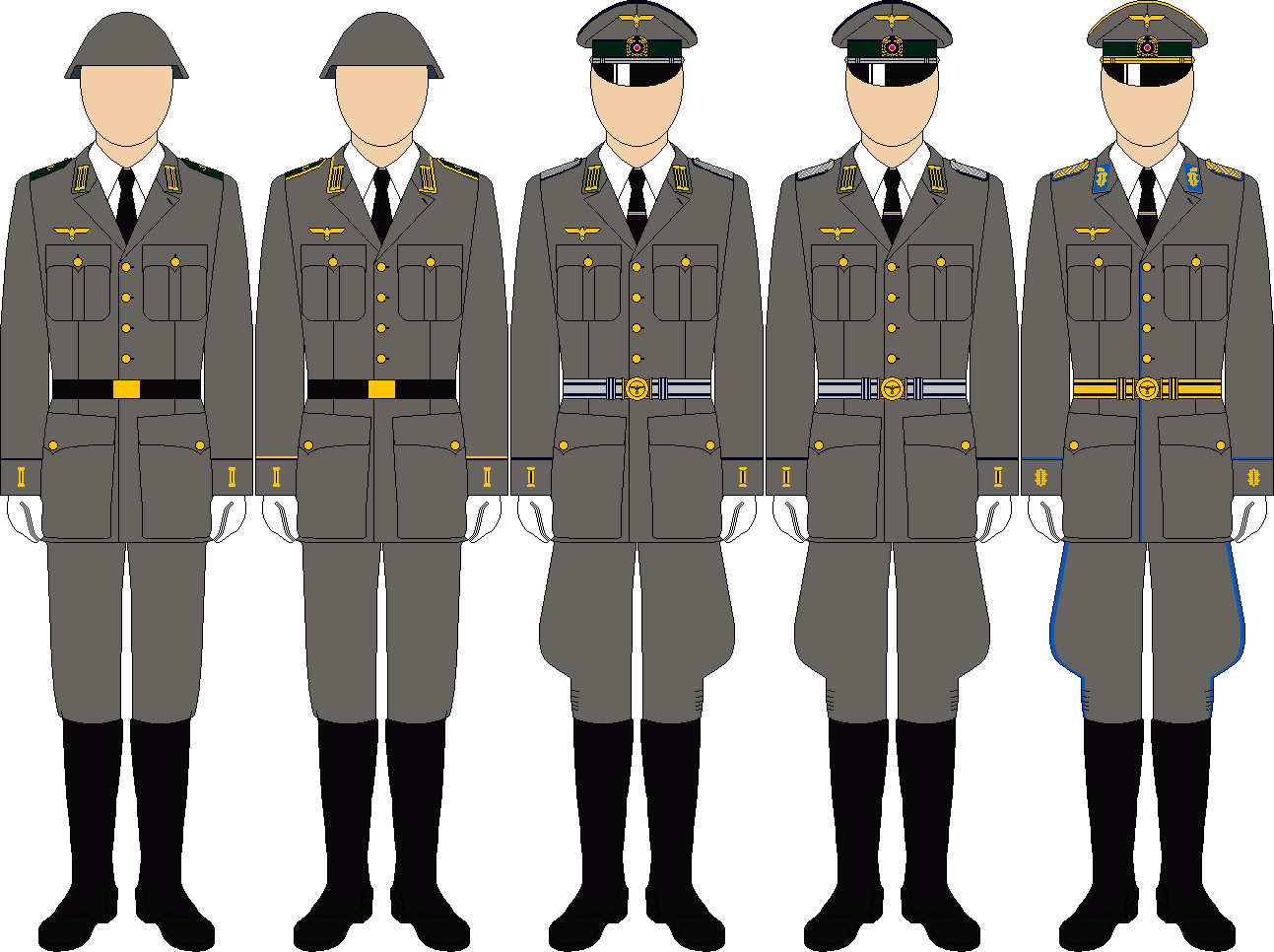 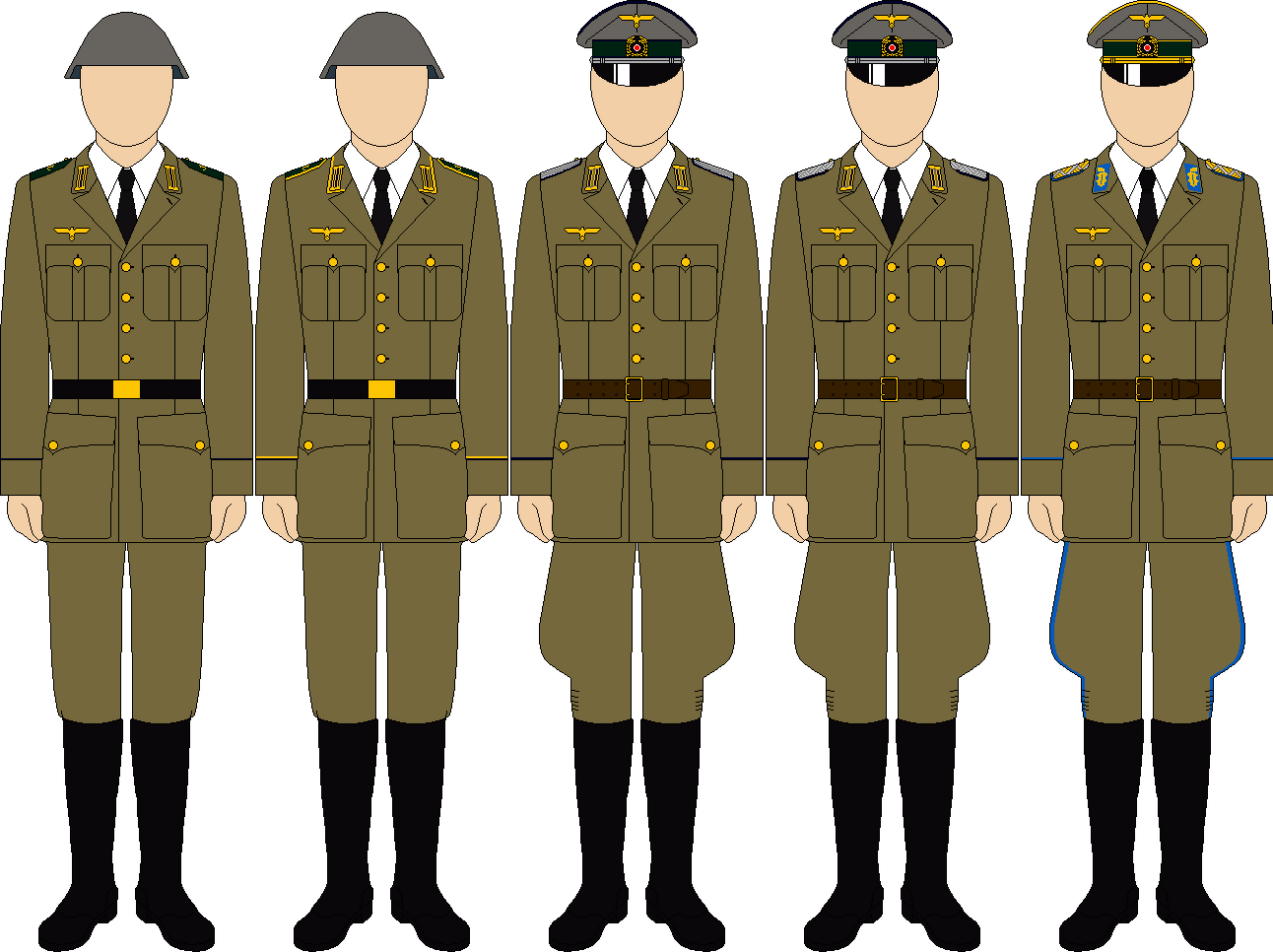 Coastal Branch Khaki Dress Uniform - Worn by the Coastal Branch during summer. It is the equivalent of the white uniform of the rest of the Navy.

These uniforms are generally worn by personnel in administrative positions, or by officers at sea. 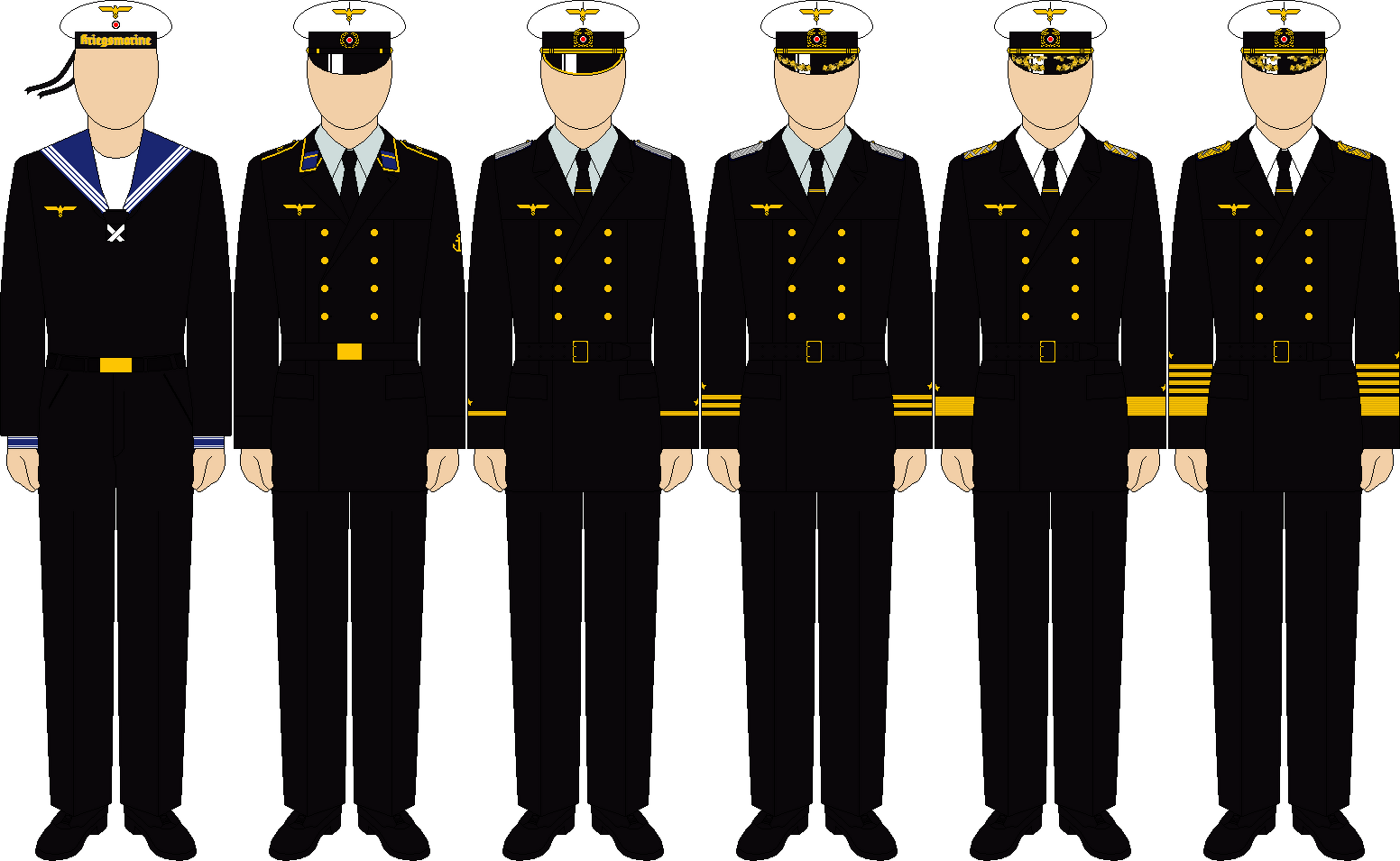 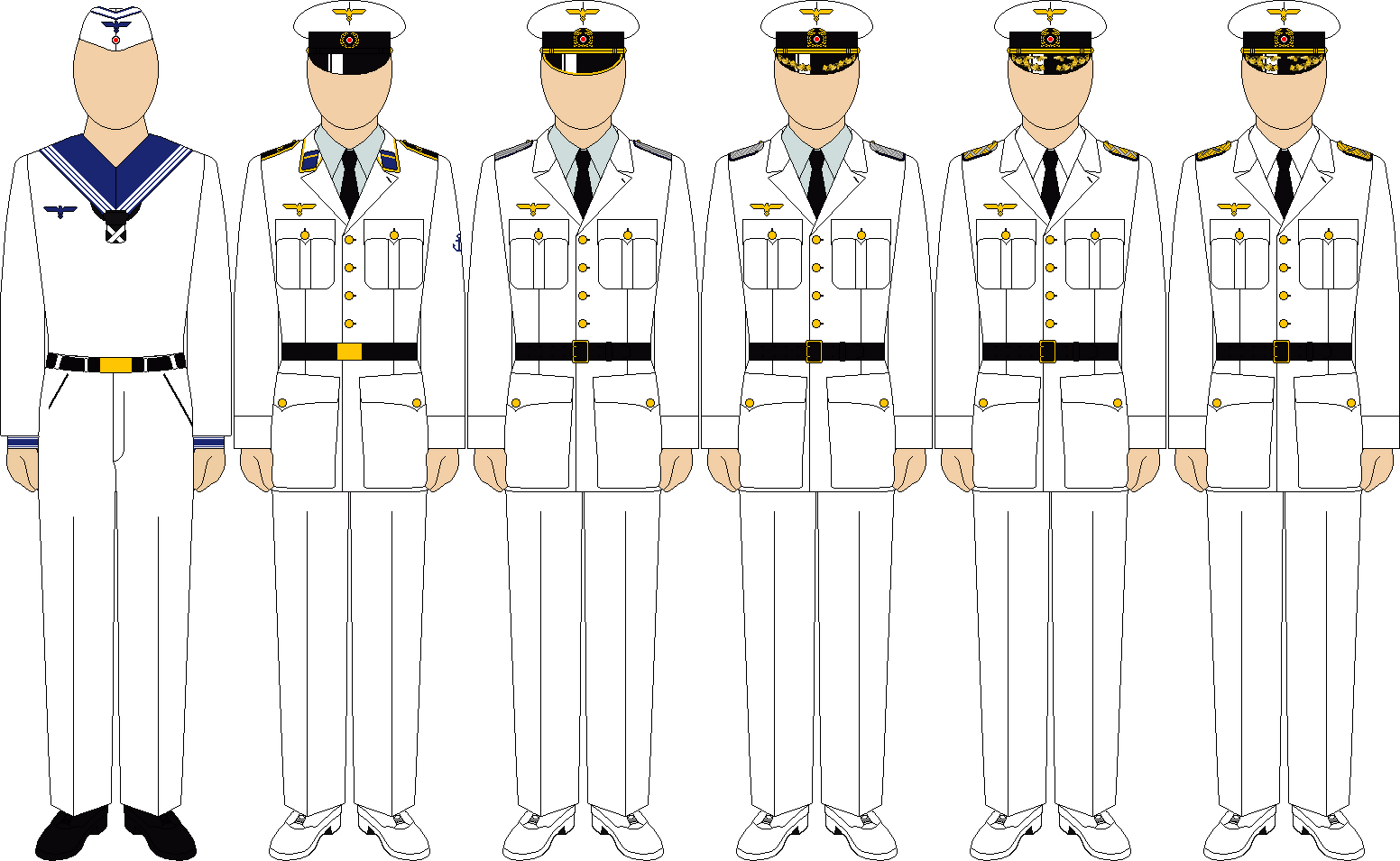 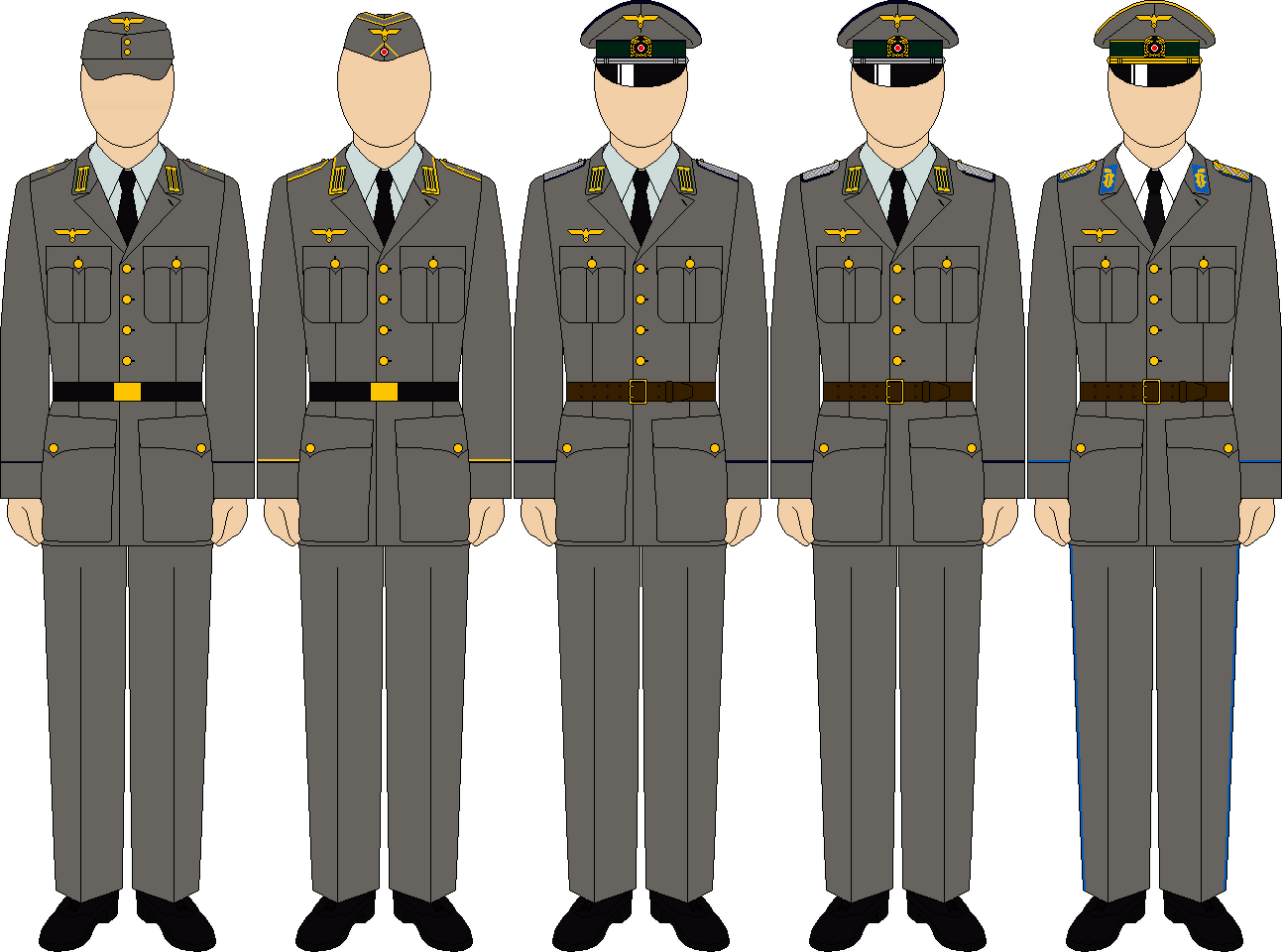 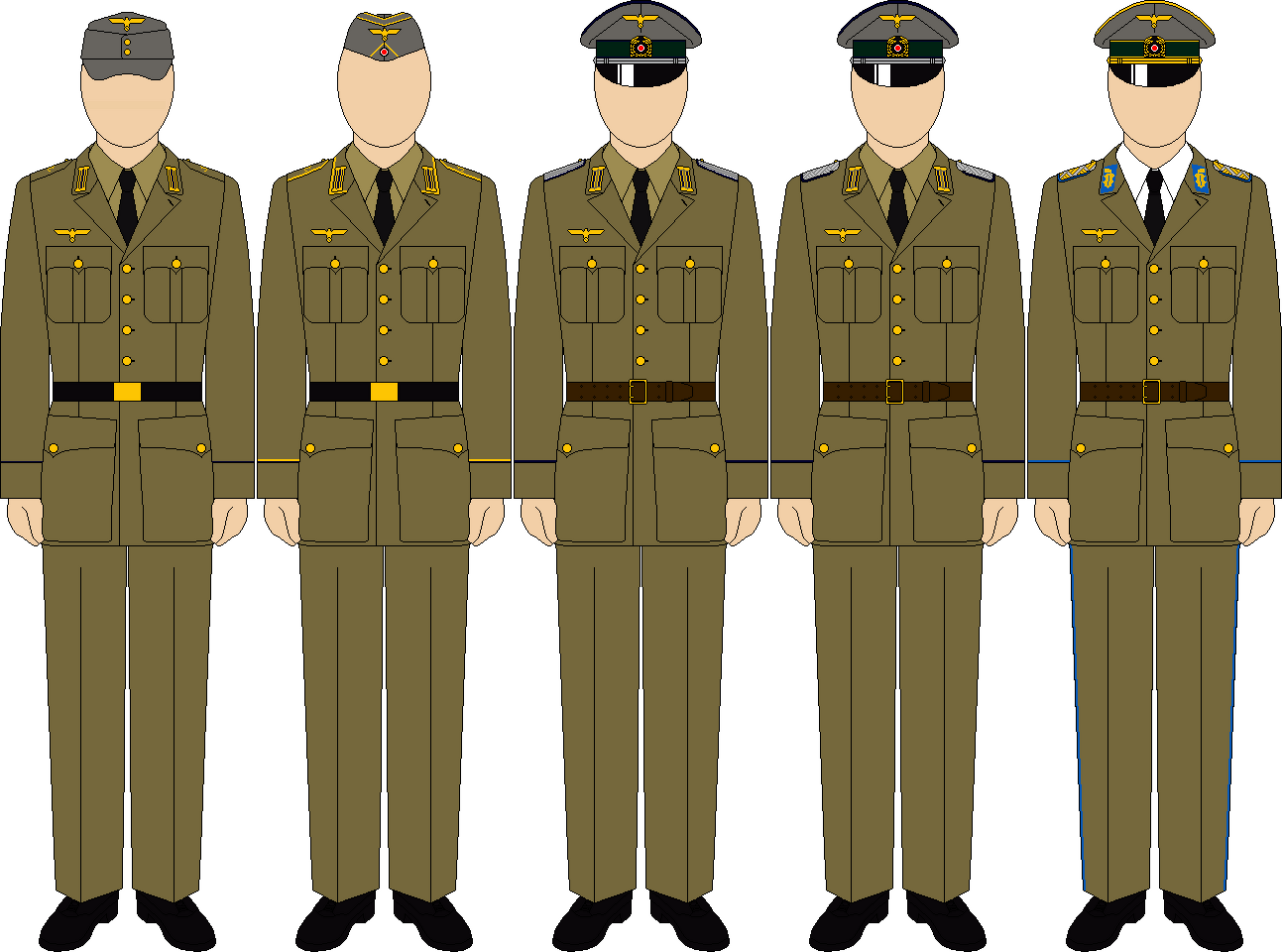 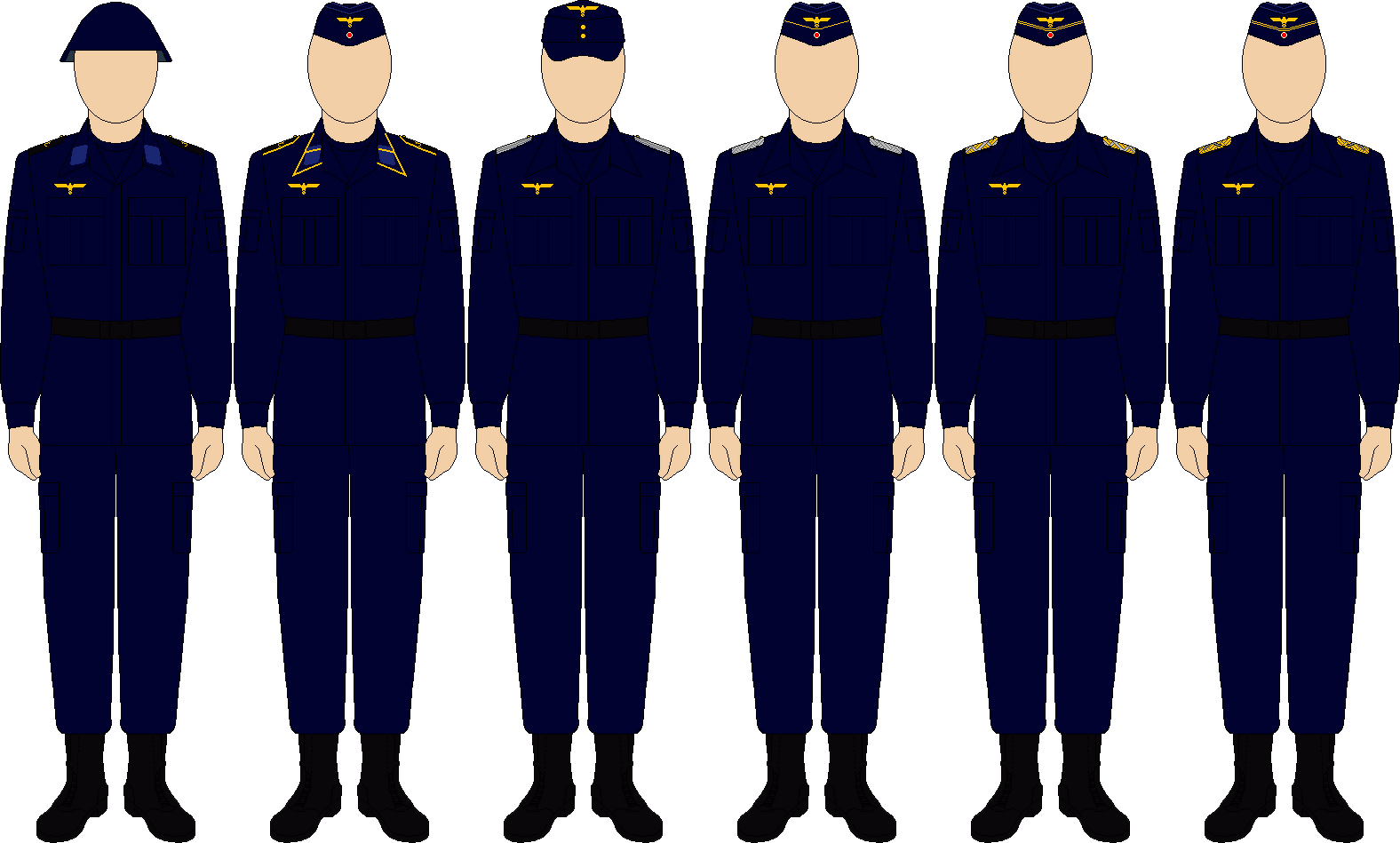 Working Uniform - General purpose working uniform for ship and shore. An M56 Stahlhelm may be worn in combat, on shore parties, or on boarding parties. 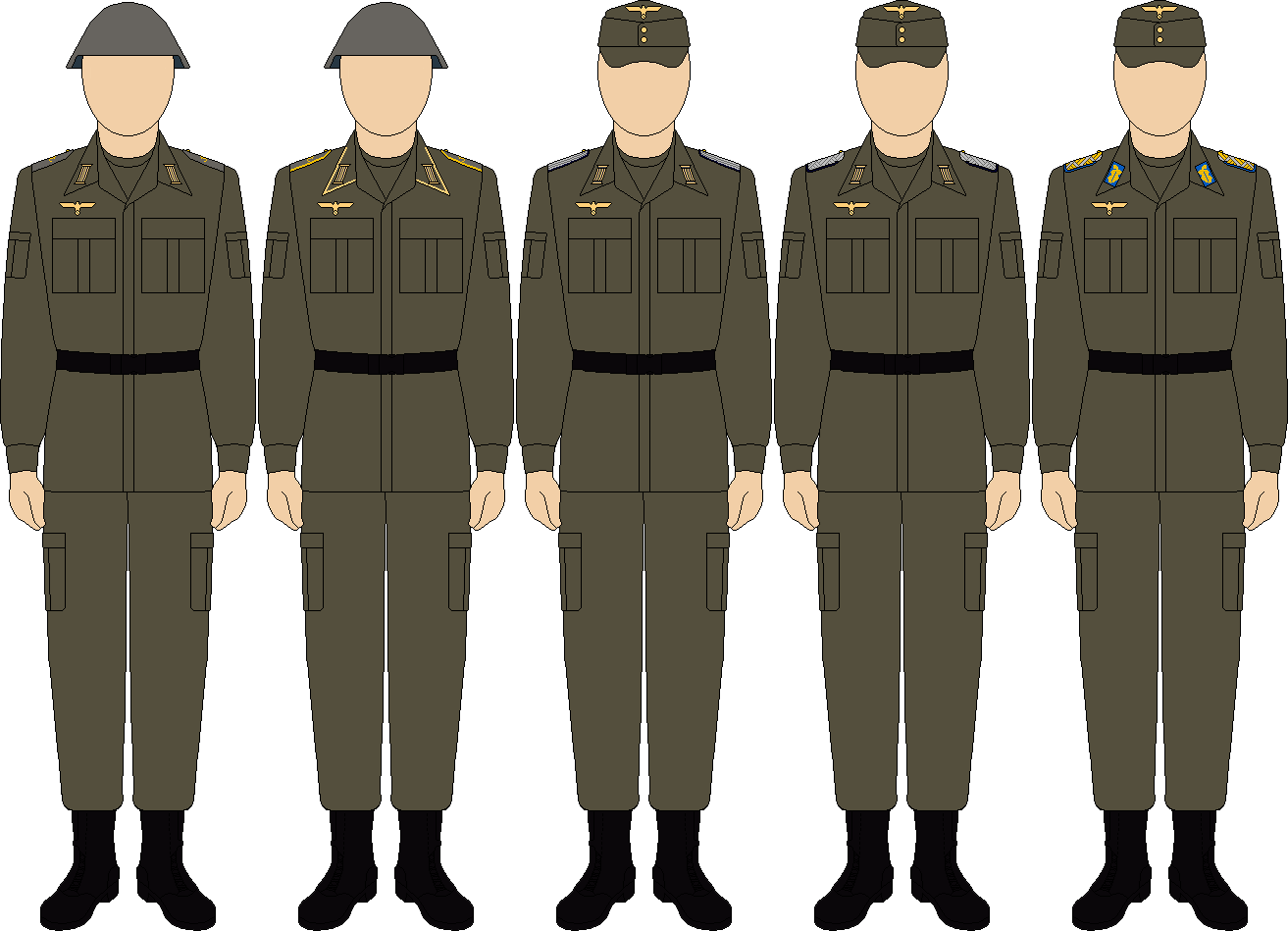 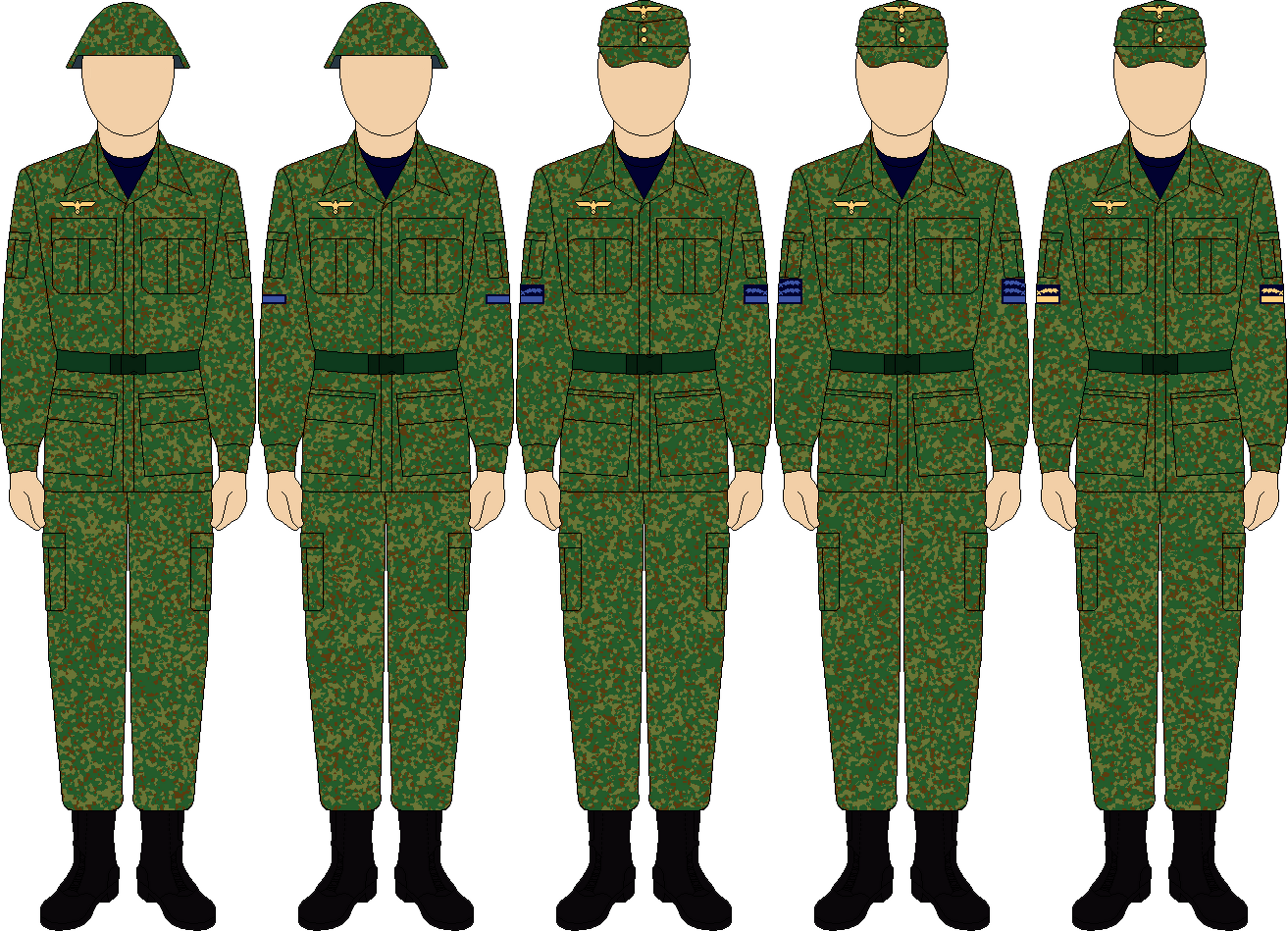 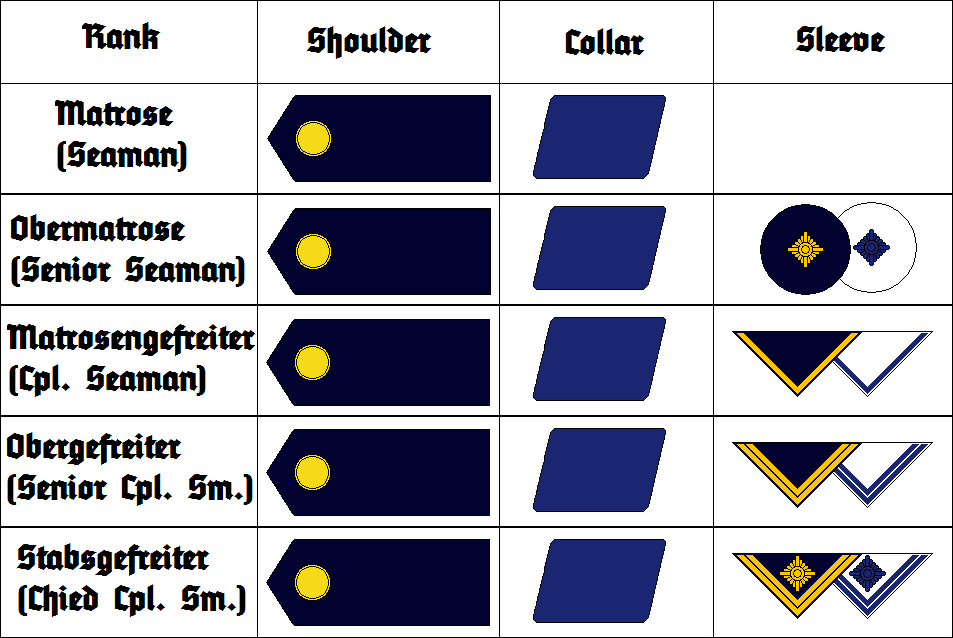 Men up to the rank of Stabsgefreiter wear shoulder boards on working uniforms only. 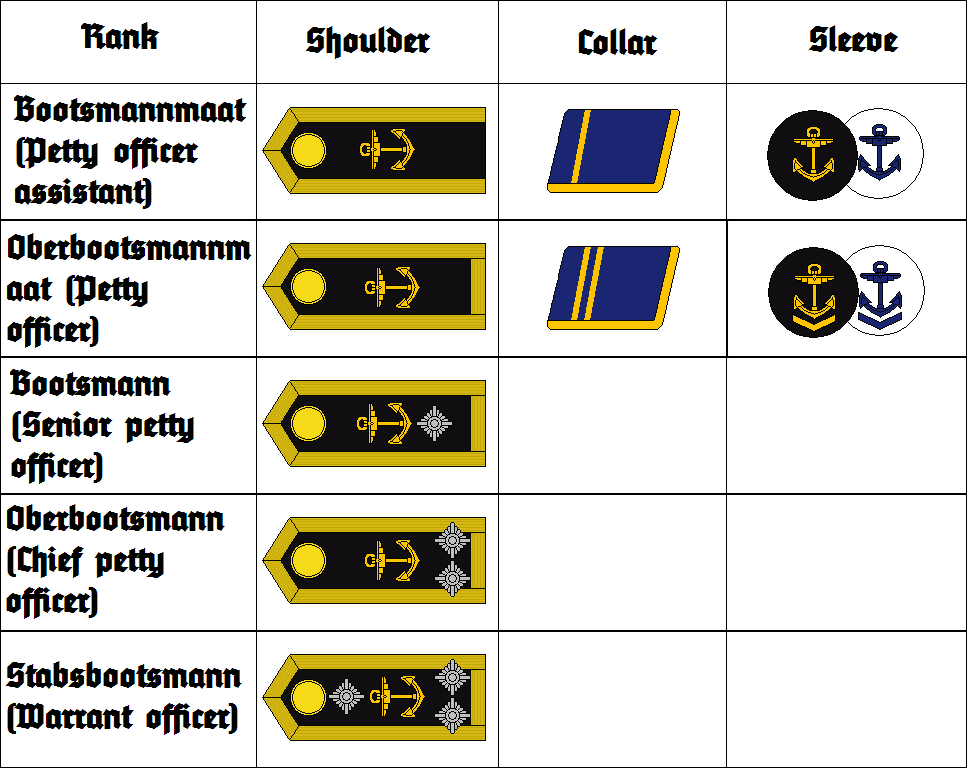 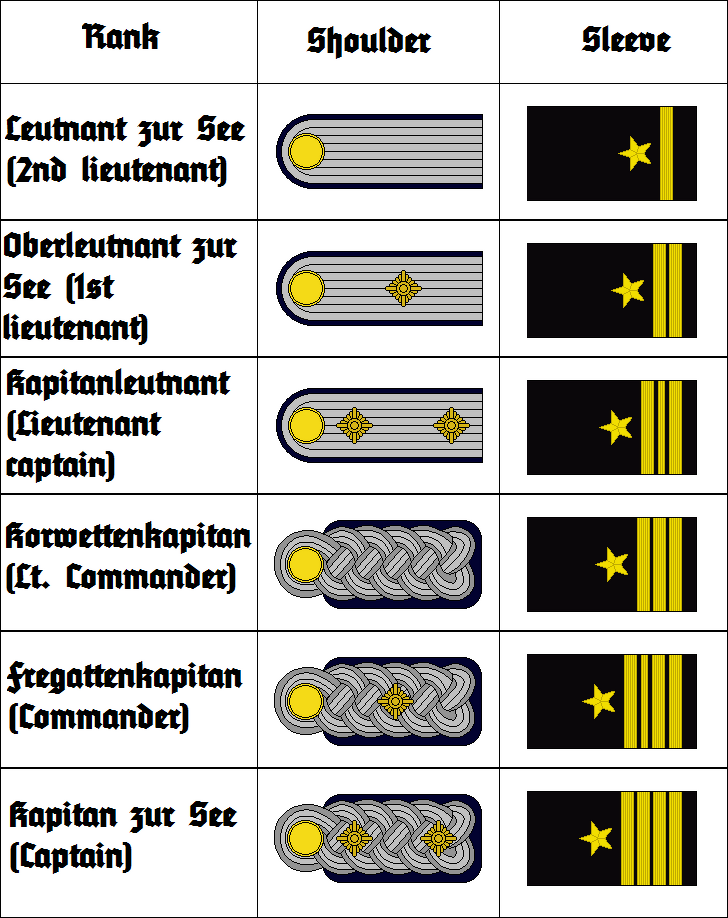 On Blue "Reefer" coats, both sleeve insignia and shoulder boards are worn. This applies also to Mess Kit. Shoulder boards only are worn on "Red Sea Rig", great coats, and summer uniforms. 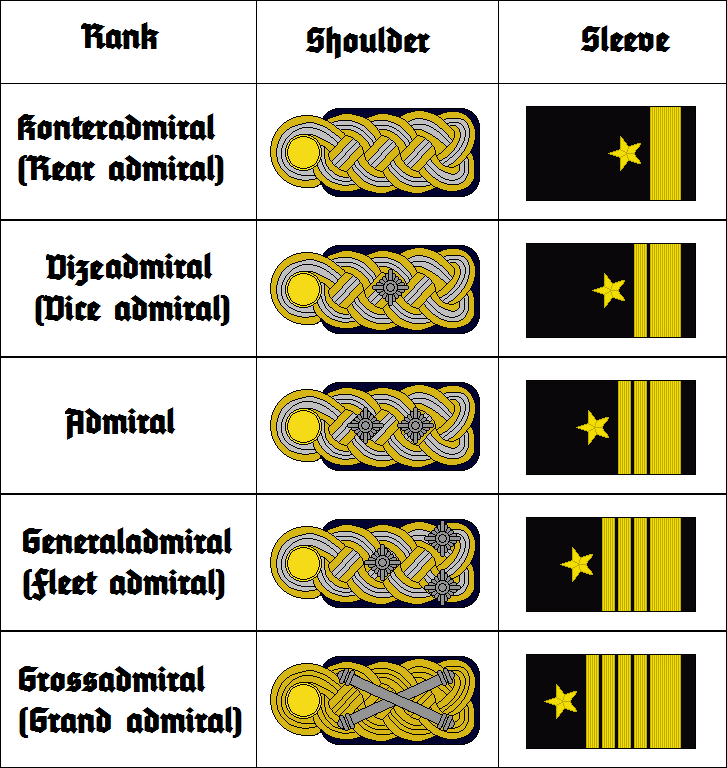 On Blue "Reefer" coats, both sleeve insignia and shoulder boards are worn. This applies also to Mess Kit. Shoulder boards only are worn on "Red Sea Rig", great coats, and summer uniforms.

Retrieved from "https://themarshall.fandom.com/wiki/Kriegsmarine?oldid=9665"
Community content is available under CC-BY-SA unless otherwise noted.