Australia, officially the Commonwealth of Australia, is a country in the Southern Hemisphere comprising the mainland of the Australian continent, Papua New Guinea, North Island, South Island, Tasmania and numerous smaller islands in the Indian and Pacific Oceans. Neighbouring countries include Indonesia to the north, the Solomon Islands, Vanuatu and New Caledonia to the northeast and New Zealand to the southeast.

For at least 40,000 years before European settlement in the late 18th century, Australia was inhabited by indigenous Australians, who belonged to one or more of the roughly 250 language groups. After discovery by Dutch explorers in 1606, Australia's eastern half was claimed by Britain in 1770 and initially settled through penal transportation to the colony of New South Wales, formally founded on 7 February 1788 (although formal possession of the land had occurred on 26 January 1788). The population grew steadily in subsequent decades; the continent was explored and an additional five self-governing Crown Colonies were established.

On 1 January 1901, the six colonies became a federation and the Commonwealth of Australia was formed. Since Federation, Australia has maintained a stable liberal democratic political system and is a Commonwealth realm. The population is 32 million, with approximately 50% concentrated in and around the mainland state capitals of Sydney, Melbourne, Brisbane, Perth and Adelaide. The nation's capital city is Canberra, in the Australian Capital Territory.

The Commonwealth of Australia is a federative constitutional monarchy under a parliamentary democracy. The Commonwealth of Australia was formed in 1901 as a result of an agreement between six self-governing British colonies, which became the six States. The terms of this agreement are embodied in the Australian Constitution, which was drawn up at a Constitutional Convention and ratified by the people of the colonies at referendums. The structure of the Australian Government may be examined in light of two distinct concepts, namely federalism and the separation of powers into legislative, executive and judiciary branches of government. Separation of powers is implied from the structure of the Constitution which breaks down the branches of government into separate chapters.

Australia is a federation of eight states, and the Australian Constitution provides for a federal legislature, consisting of the Queen, the Senate, and the House of Representatives. Section 51 of the Constitution provides for the Commonwealth Government's legislative powers and allocates certain powers and responsibilities (known as "heads of power") to the Commonwealth government. All remaining responsibilities are retained by the eight colonies, which under the Constitution became States of the Commonwealth of Australia. Further, each state has its own constitution so that Australia has nine sovereign Parliaments, none of which can encroach on the functions of any other. The High Court of Australia arbitrates on any disputes which arise between the Commonwealth and the States, or among the States, concerning their respective functions.

The Commonwealth Parliament can propose changes to the Constitution. To become effective, the proposals must be put to a referendum of all Australians of voting age, and must receive a "double majority":

Three of Australia's territories (Australian Capital Territory, Northern Territory, Norfolk Island) are self-governing, the rest are governed by the Commonwealth, though local governments in larger territories are elected.

Government is undertaken by three inter-connected arms of government:

The Separation of Powers is the principle whereby the three arms of government undertake their activities separate from each other:

Until the passage of the Australia Act, cases could be appealed to the Privy Council in England. The Australia Act abolished such appeals, making the High Court of Australia the highest court of appeal in Australia.

The legislative branch of the Australian Government is the Australian Parliament. It consists of the Queen, the Senate, and the House of Representatives. The role of the Queen is taken by the Governor General as the Queen's representative, and his role is to grant (or in exceptional circumstances withold) Royal Assent to bills passed by both houses. Most Australian politicians are members of political parties.

The Senate is the elected upper house. It consists of 12 members from each state, plus two each from the Northern Territory, and the Australian Capital Territory, making for a total of 100 Senators. The state Senators are elected for six year terms in a preferential voting system that encompasses all the voters in that state. Territory Senators are elected in the same way to non-fixed terms (the length of the Parliament, always less than three years).

The House of Representatives[edit | edit source]

The House of Representatives is the lower house. Its 200 members are elected from single-member Divisions which have roughly proportional populations. All proposals for taxation and spending must originate in the House, and the leader of the largest party in the House is the Prime Minister, while the leader of the second largest group is the Leader of the Opposition. Senior members of the Opposition form a Shadow Cabinet which has the task of shadowing the government's ministers.

The Cabinet is not recognised in the Australian Constitution, but most government decisions are discussed and made by the Cabinet, and all Cabinet members are memebers of the Executive Council.

Australia has the following Cabinet Portfolios:

{see Justice and Law in Australia} 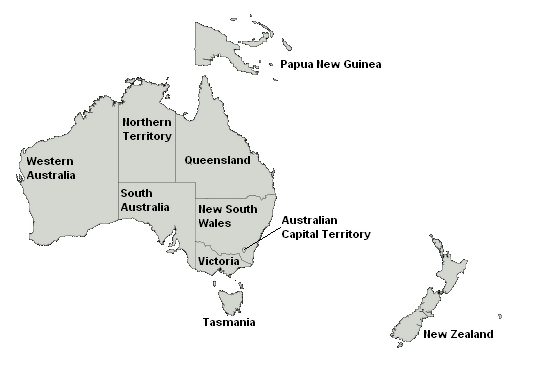 The Australian economy is a prosperous, free market economy dominated by its services sector, though minerals and agruculture account for most of its exports. The currency of Australia is the Australian dollar, which is also used by Kiribati, Nauru and Tuvalu. Australia's main stock exchange is the Australian Stock Exchange in Sydney, New South Wales.

According to both the Fraser Institute and the Heritage Foundation, Australia has one of the most free economies in the world, and the most free of the large nation states. It is ranked highly in the Human Development Index.

Australia's major export commodities are agricultural products (mainly wheat and wool), minerals such as gold or iron ore, and energy in the form of coal, liquefied natural gas, and uranium.

Over the last twenty years, the Australian economy has undergone significant reform. The most important reforms include:

Australia has a medium sized nuclear industry, with approximately 20 research and electrical production nuclear reactors. It exports uranium, and medical isotopes. Australia also has a small space program. Although there are no ambitions to launch a man into space, Australia launches satellites for a variety of clients. Australia's automotive industry has been through extensive restructuring following the LDP's insistence that there be no government aid for the industry. Australia has an aviation industry which focuses on upgrades/rebuilds, general aviation, and military aviation. Leading Australian aviation companies include:

Retrieved from "https://themarshall.fandom.com/wiki/Australia?oldid=7738"
Community content is available under CC-BY-SA unless otherwise noted.